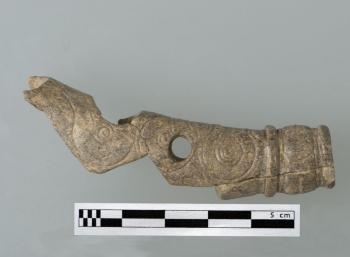 In this article, a horse-bridle toggle from a final Late Helladic I context in elite Building H at Mitrou is identified on the basis of its form and decoration as an object with close ties to the Carpatho-Danubian zone. In a stage of reworking the toggle was provided with serrated edges, which suggests an association with the introduction of the light horse-drawn chariot. This find helps reconstruct a long-distance trade route from the Carpatho-Danubian zone via the Euboean Gulf to southern Greece. Influences went both ways, with northern elite cultures playing a decisive role in the construction of a new ideology of power by Greece’s emerging elite.