Caddeddi on the Tellaro: A Late Roman Villa in Sicily and Its Mosaics

Caddeddi on the Tellaro: A Late Roman Villa in Sicily and Its Mosaics 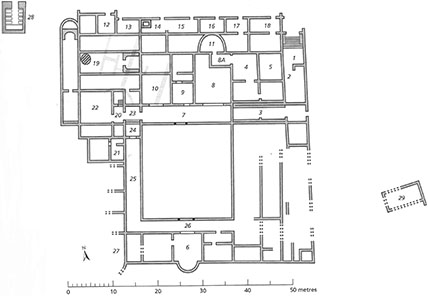 First uncovered almost a half century ago, Caddeddi is a Late Roman villa south of the river Tellaro (ancient Heloros) in southeast Sicily; this is one of only six Roman villas in Sicily known from the period. Discovered in excavations led by Guiseppe Voza are parts of three separate mosaics that have captured the attention of many publications and public interest, as could be expected. These mosaics are the focus of Wilson’s book.

Before discussion of Caddeddi or its mosaics, the author gives a brief overview of the other Late Roman villas on the island and their mosaics: Gerace, Patti Marina, Pistunina, Settefrati, and the most well known, Piazza Armerina. The last is given the most attention, and overall this provides a good basis for subsequent discussions. Emphasized in this chapter, and an underlying theme of the rest of the book, are the characteristics of the mosaics indicating a connection to mosaicists from Africa. This is an intriguing framework in which to place the mosaics of Caddeddi, and Wilson goes into further detail surrounding the chronological and geographical contexts of the mosaics once all is presented.

After introducing the site of Caddeddi and its chronology and metrology, the author discusses the three mosaics. He begins with the smallest surviving one: the Ransom of Hector. This was just one of (hypothetically) 12 square designs covering what Wilson interprets as the principal dining room (32), but the names of “Odysseus,” “Achilles,” and “Trojans” coupled with telltale iconography make the identification certain. Next, the Bacchus mosaic, adorned with the traditional representations of various fruits and scenes of satyrs and maenads surrounding Bacchus himself, is stylistically similar to comparanda from Carthage, perhaps even the work of a single group of craftsmen. Last, the most intricate of the three, earning a place on the cover, is the mostly complete hunt mosaic. Several scenes illustrate Roman soldiers at various stages of gathering wild beasts for transport to arenas across the empire, and these surround a seated female figure, the largest image in the mosaic. This mosaic is rightfully given the most detailed analysis, and Wilson provides solid groundwork for his interpretation of the central female figure as Mauretania, not Africa as previously suggested (104–11). The two appendices detail further stylistic elements of the mosaics such as saddles, shoes, and legwear, including how in the Ransom of Hector mosaic the shoes and legwear worn by the Greek heroes and the Trojans are most likely Roman in origin. This is plausibly due to the mosaicist being more interested in overall impressions than historical accuracy (135).

So, what can these mosaics tell us about the inhabitants of this villa? Unfortunately, Wilson does not attempt to answer that question at length. Perhaps this is because there is little evidence for discussion, or, more likely, because he is reserving that topic for Voza’s forthcoming publication on the entire site. What can be said paints a picture of a wealthy, but maybe lower upper-class, family that only emphasized luxury in the areas that their guests would have frequented. For example, the only known entrance is in the northeast corner, and although a stair of seven white marble steps leads to a mosaic-paved vestibule, “this is hardly a grand showpiece entrance” (31) and would have been on the bottom floor of a two-story (maybe three-story?) structure. While I am inclined to believe there was a main entrance toward the south side, if this point of access, far from and below the central peristyle and facing away from views of the Tellaro River valley, was indeed the first impression for visiting dignitaries, it would have been quite disappointing. Entering instead from the southern end of the villa would have allowed the visitor to be led past the central peristyle, presumably with a garden, into Room 8, where the Ransom of Hector mosaic lies (see figure). Wilson suggests that Rooms 8, 8A, and 11 were one room on the second floor (28), and if so, this would have been the largest room in the villa, ideal for entertaining guests. It would be the perfect location to embrace the view over the river valley, and given that this was a multistoried structure, the view must have been essential to its construction. One can imagine stepping into a beautifully ornate dining hall, looking past an opulently laid table to the Sicilian landscape in the distance. If guests were taken through the northeast entrance, the presentation would have been lackluster.

Wilson’s book is a highly detailed, well-researched presentation and examination of the mosaics at Caddeddi; indeed, he stresses in the preface that “this book is not, and was never intended to be, a complete publication of the Caddeddi villa” (vii). While the title may be somewhat misleading, those interested in the nuances of the entire villa will not be disappointed. Wilson’s discussion of Sicilian and North African mosaics in the Late Roman period does allow for some broad connections; however, the narrow scope is also to be welcomed, especially by those interested in Sicilian history. Further, while ancient southeast Sicily gets much attention from publications on Syracuse, the southernmost corner of the island, and the ancient town of Heloros in particular, is often overlooked. This book brings some attention to the ancient people and communities of the area. The author makes full use of informative and well-sourced endnotes. He uses them sparingly in the text, which aids the flow of the book and avoids bogging down the analyses with minute detail. The almost 200 figures adorn nearly every page, and, albeit necessary for any examination of mosaics, enhance the book greatly, allowing the reader to follow along closely. Perhaps the only disappointing elements in the volume are the two site plans. The villa was partly built on a spur where the remains of the eastern section are on a slope, and the northern section is actually the ground floor. There are two site plans included (figs. 2.2, 2.4); however, neither indicates elevation changes. In fact, only one illustration, figure 2.7, a photograph taken from the northeast corner facing up the slope to the southwest, makes the geological conditions noticeable. As Wilson indicates (27–8), there is no contour map of the villa, which would be quite helpful as only a careful reading of the text lets one fully appreciate the site. Otherwise, the site plans are useful, demonstrating the extent of the villa that still survives, identifying the room numbers for easy referencing, and indicating the placement of a modern farm building covering much of the southern portion of the villa.

Lastly, Wilson concludes with a riassunto italiano of the six chapters and appendices, giving this book immediate value to those more comfortable reading Italian. Overall, this book is a significant introduction to the villa, leaving the reader anticipating Voza’s more thorough publication of the site.

Book Review of Caddeddi on the Tellaro: A Late Roman Villa in Sicily and Its Mosaics, by R.J.A. Wilson