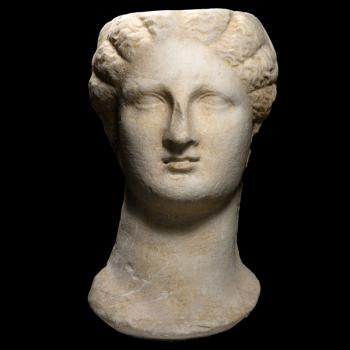 A group of three fragmentary marble statues of colossal scale came to light in 1913 on a low hill known as Dobër in the countryside of Butrint, Albania. A fourth statue fragment, a veiled female head dated stylistically to the late fourth or third century BCE, now in Ioannina, Greece, was said to have been found in the same area, but new archival research casts doubt on that assertion. In this study, we reassess the technical and iconographic features of these statues. We argue that the group from Dobër, which presumably stood inside a temple there, depicts the enthroned Mother of the Gods joined by two standing companions: Attis or a figure from the Trojan saga, such as Askanios, and a fragmentary and unidentifiable male figure. We propose that the group is a visual representation of the well-known literary links between the coast of Butrint and the land of Troy, and further, that it provides testimony for the privileged position that the region had with Rome during the periods of both the Macedonian Wars and the Augustan colonization. As these statues demonstrate, the area of Butrint was a crucial point of encounter between East and West and of cultural mediation for both Greeks and Romans.

By Milena Melfi and Brian A. Martens