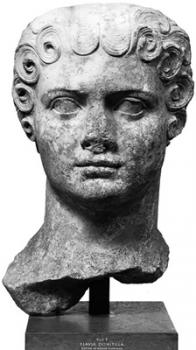 Portraits of the Flavian imperial women, Julia Titi and Domitia Longina, bear a new coiffure that sets them off from portraits of Julio-Claudian women. The coiffure, with its high brim of curls, or toupet, is identified with the last generation of Flavian women, although it outlasted them and continued to be represented in the early second century C.E. Furthermore, the toupet adorns many private portraits that have been dated to after 81 C.E. The scholarship assumes that private portraits derived from imperial models, but it is time to reconsider the established chronology and conventional attitudes about imperial influence and fashion, adornment, and privilege. It is challenging to identify portraits and to distinguish imperial portraits from private portraits. In particular, scholars have depended on biographies from ancient historians to differentiate imperial women’s features, although portraits tend toward homogeneity and established styles.