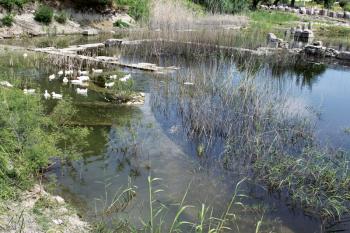 In sanctuaries at Eleusis, Olympia, and Xanthos, second-century C.E. patrons built novel water features near traditional benefactions and sacred monuments; careful placement of these new water sources helped emphasize their historical and sacral relevance. Juxtaposed with the archaic treasuries at Olympia, the Early Classical Kallichoron Well at Eleusis, and the Hellenistic Grotto of the Nymphs at Xanthos, the latest additions to these sanctuaries incorporated a number of innovative architectural and display features—including large open-air basins and apsidal porticoes—that created a striking visual contrast between old and new. In each of the three sanctuaries, the strategic placement of the fountain emphasized the role of the new patron as guardian of long-standing religious traditions, while the arresting architectural form simultaneously maximized the visual impact of the fountain on thirsty worshipers and heightened the anticipation of the rituals that would be carried out in front of the monument.