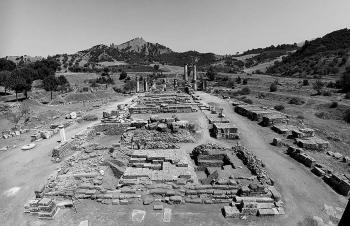 Excavations in the Sanctuary of Artemis between 2002 and 2012 clarified problems of chronology and reconstruction. Evidence for occupation of this area in the Lydian period was ambiguous: pottery suggests that there was activity here, but no deposits were found. Surviving monuments from the Persian period include a calcareous tufa altar (LA 1) and a roughly square sandstone “basis.” In the Hellenistic period, a new temple was laid out with the sandstone basis in the center of its cella, while the tufa structure was incorporated within a larger altar. The Hellenistic builders thus constructed the largest temple possible between these earlier monuments, but they brought its west front so close to the altar that a normal colonnade on the front would not have been possible. In the Roman period, the temple was divided into two back-to-back cellas, and work on the exterior colonnade began on the new east front. Ceramic evidence indicates that the foundations were laid in the mid first century C.E. During this phase, the Hellenistic columns in antis still stood in situ, but the interior columns were removed, perhaps to accommodate colossal statues of the imperial family. The columns in antis were removed in late antiquity, during a major transformation of the building.