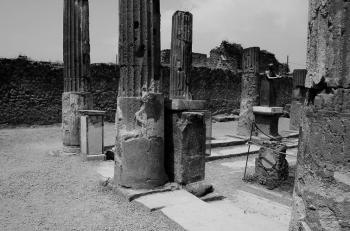 This article details the most recent activities of the Pompeii Forum Project. Recent field studies and completion of the analysis of context materials from excavations in 1997 and 2001 allow a detailed appraisal of the early history of the Pompeii Forum from the Samnite period onward. The results are radical. The old so-called Altstadt theory for the birth of Pompeii and especially the belief in a grand Hellenized Samnite-phase city move into the realm of creation myth, replaced by a new and archaeologically supported understanding of the evolution of the city in Late Republican and Augustan times. The new understanding of Pompeii’s early development harmonizes closely with recent discoveries, by numerous other archaeological teams, concerning the Archaic through the Samnite periods throughout the city and with recent studies of parallel urban development elsewhere in southern Italy in the first century B.C.E. A summary of the scholarly record since 1980 documents the initial radical transformation of our understanding of Pompeii’s overall urban development. The Samnite, Sullan, and Augustan phases of the forum are explicated as a chronological overview. In the near future we will publish a follow-up article that will present the trenches excavated in 2001, including Archer Martin and Raffaele de Palma’s analysis of the context materials from our excavations in 1997 and 2001, plus an initial discussion of how the entirely unexpected context materials have forced us to reconsider our understanding of the Augustan contribution to the Pompeii Forum. Ultimately, the Pompeii Forum Project will publish a comprehensive monograph on the forum, the buildings surrounding it, and associated urbanistic interpretation.