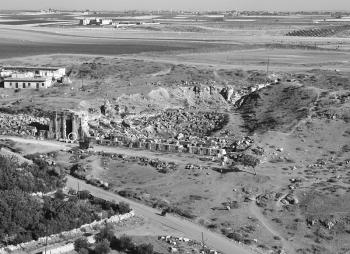 This preliminary site report discusses new archaeological information gleaned from the first three seasons of renewed excavations at the Great Roman Theater of Apamea, Syria. It revises our understanding of the construction phases and uses of this important structure. Although one of the largest extant buildings of its type in the Roman empire, the theater at Apamea has never been thoroughly excavated or studied, nor have its surrounding contexts been explored to explain how this Roman-era community supported such massive entertainments and met the needs of the theater’s large audiences. Preliminary excavations undertaken by the Syro-American Expedition to Apamea from 2008 through 2010 point to the role of the Great Roman Theater as a water catchment facility with the potential for holding naumachiae (naval battles) and gladiatorial entertainments, as well as pagan water festivals such as the Maiumas. Additionally, these excavations reveal that the theater’s water distribution systems were utilized and adapted into the Byzantine period. Renewed archaeological explorations beneath the present orchestra floor demonstrate that a Roman-era reinforced-cement substructure rests over a previously modified bedrock surface of possible Hellenistic date. This article also discusses the unique design and engineering aspects of the Apamea theater in relation to similar theatrical structures throughout the Roman empire. A review of the historical importance of Apamea and its cultural contexts provides the backdrop for this new archaeological evidence.