Exemplars of Kingship: Art, Tradition, and the Legacy of the Akkadians

Exemplars of Kingship: Art, Tradition, and the Legacy of the Akkadians

This monograph is an expansion of the author’s 2009 Harvard University doctoral dissertation. It aims to research “the visual legacy of Akkadian kingship” (3, and the title of her dissertation) in the empire founded by Sargon of Akkad, traditionally ca. 2350 BCE. This aim is more than fulfilled by the author with a book that will also serve as an approachable introduction to ancient Near Eastern art.

Connecting visual and textual evidence, Eppihimer takes the reader on a journey to discover the inner structure of the Mesopotamian concept of kingship. This approach is not new in ancient Near Eastern studies but is here lifted to a higher level, leading to a better and deeper understanding of ideas behind kingship as a whole. The author delivers a fresh new look at the topic of Mesopotamian kingship beginning in chapter 1 (“Behold Sargon”) with the eponymous emperor, who was stylized as the archetype of a Mesopotamian king. This chapter and its clear argumentation serve as the starting point on a logical path that does not end until the last page of the book.

In chapter 2, “Exemplars of Kingship and the Art of Memory,” the author draws connections between visual traditions, royal authority, and time in Mesopotamia. The problematic topic of tracing immateriality is tackled with the argument that material traces of memory can be found in “ritual behavior, narratives, representations/objects, and places” (15). The author broaches the important question concerning “the temporalities of images” (23) in such diverse case studies as the endeavors of different kings to recreate a god’s image or to reinstall the En-priestess office at Ur via an image preserved on artifacts, as well as the rebuilding of a temple or the reconstruction of city walls.

At the core of the book (chs. 3–5), three different categories of Akkadian art that present kingship are addressed: stelae, statues, and cylinder seals. Eppihimer’s division is further explained by the different subjects of this art: “the king victorious over his enemy in battle, the king in the presence of the gods in the temple, and the struggle between mythological heroes and animals known today as the contest scene” (8). This also includes a summary of modern interpretations of Akkadian art that needs to be deconstructed before the discussion of an ancient reception can be attempted. This very approach plays a major role in the recent shift in modern scholarship concerning the interpretation of preclassical art, as exemplified by Marian Feldman’s Communities of Style: Portable Luxury Arts, Identity, and Collective Memory in the Iron Age Levant (University of Chicago Press 2014). It is also a decolonization of our way of looking at ancient art, despite the long road to move beyond conventional ways of thinking biased by our own social environment. But Eppihimer is aware of her own cultural and biographical limitations (207); her self-reflection is in its own right an important yet seldom taken step toward a new honesty within modern scholarship. Also, throughout the book the author provides multiple solutions to diverse problems. She is not reluctant to state her own preferences but, first and foremost, does not confuse the situation with complicated arguments that so often prevent further exploration. As a result, Eppihimer is able to finally put away some of the blinders (German Scheuklappen) that still prevent specialists in art history from looking at ancient Near Eastern art as a valuable corpus in its own right. 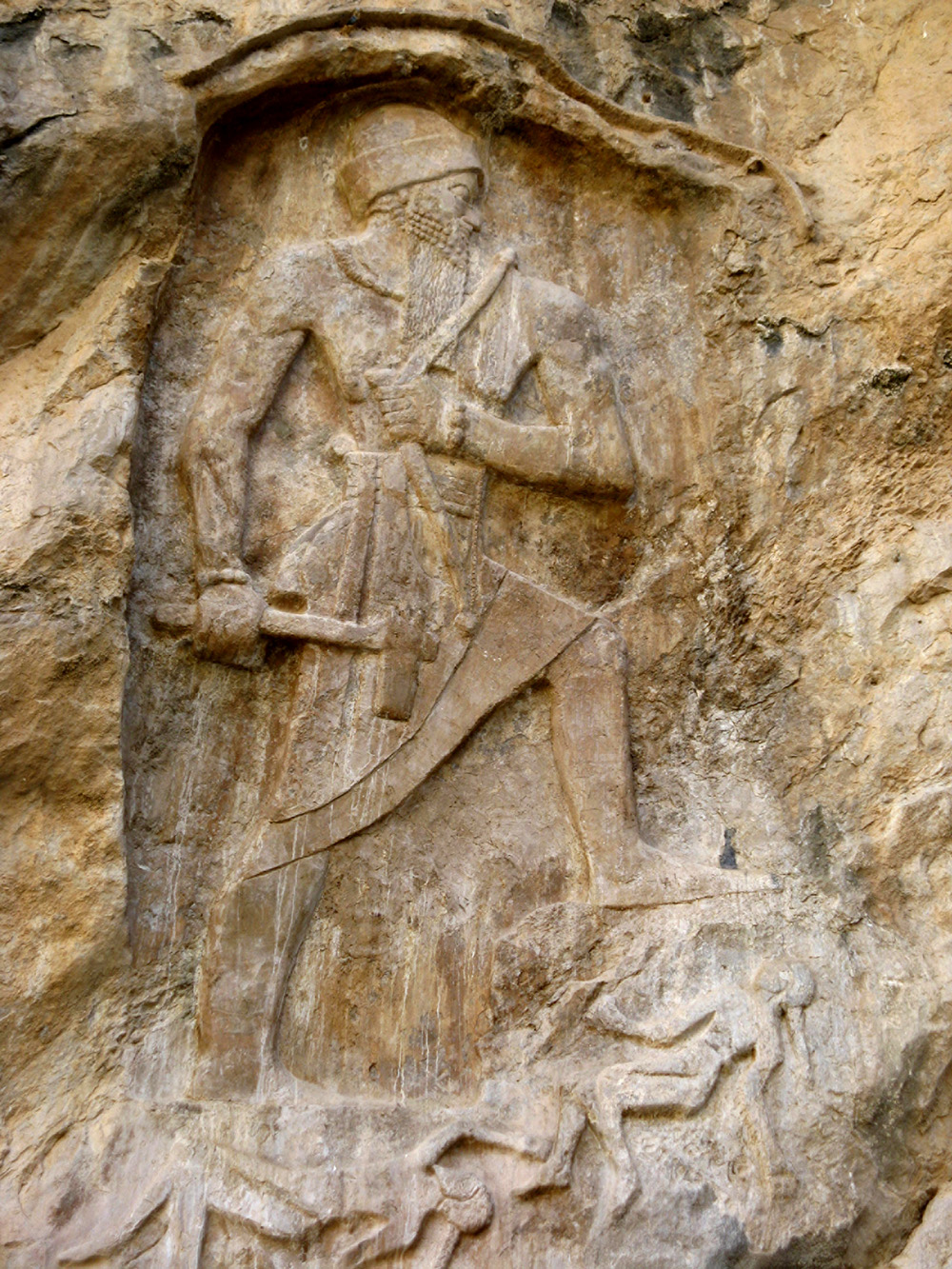 In chapter 3, the Zagros rock reliefs of Sar-i-Zohab and Darband-i-Gawra are reexamined as representing two distinctive groups of royal themes and ideologies. Eppihimer moves a seemingly long-stalled discussion in the right direction concerning the age of the latter relief (fig. 1, herein). She rightly dismisses the idea that the Darband-i-Gawra rock relief represents an Akkadian ruler comparable to that on the stele with a deified king Naram-Sin found at Susa (37). The upper part of a stele (1N 281) with a similar composition to the Darband-i-Gawra relief was found reused in place of a door socket postdating the Kassite level III of the so-called Enlil temple to the northwest of the ziggurat at Nippur (D.E. McCown and R.C. Haines, Nippur I –Temple of Enlil, Scribal Quarter, and Soundings, Chicago 1967, Pl. 32:1), but only with the discovery of an inscribed lower part of this stele could the question of the date of this kind of relief be resolved.

The question of the age of a torso (fig. 4.14) supposedly found in an Ur III level (ca. 2112–2004 BCE) within the ziggurat courtyard of the Ekur temple of Enlil at Nippur (114) deserves further elaboration here. Regrettably, the torso was in fact discovered in a much later stratum overlying a pavement consisting of reused fragments of red-veined alabaster, with an inscription mentioning the Kassite king Kadašman-Enlil I/II (ca. 1374–1360 / 1260–1255 BCE) that serves as a terminus post quem (see this reviewer’s “Studies Concerning the Kassite Period Ekur of Nippur: Construction History and Finds,” in S. Paulus and T. Clayden, eds., Babylonia Under the Sealand and Kassite Dynasties, De Gruyter 2020, 146–64). Only a primary finding position would have been of further help here in dating the monument. The possible date of the torso itself ranges from the Ur III to the Old Babylonian period (ca. 2112–1595 BCE). According to the author, the jewelry on this torso closely resembles that on Akkadian statuary; however, the beard displays similarities to the stele of Urnamma (fig. 3.13), leaving an Ur III date open. This observation is consistent with an examination of a fragmentary inscription preserved on the back of the torso that has suggested an Ur III date (B. Meissner, “Sumerer und Semiten in Babylonien,” AfO 5, 1928–29, 1–10).

The concluding chapter (ch. 6, “Allusions and Illusions”) is filled with sharp observations as well as comments pointing out interrelated long-term patterns usually overlooked by general discussions in the field of ancient Near Eastern studies. For example, the author recognizes that the inscription concerning a monument of Ishme-Dagan (ca. 1953–1935 BCE) at Nippur is associated with another depiction of Shulgi (ca. 2094–1982 BCE) as a runner, suggesting that “undoubtedly the king wanted his image to be understood in light of Shulgi’s kingship.” Further, the author connects it with earlier cases from the same site: “Once again, the temple sanctuary at Nippur housed monuments binding one king to another before him, as it had for Erridu-pizir of Gutium, Shu-Sin of Ur and the Akkadians” (204). Although others have drawn similar connections, according to Eppihimer the pattern of Mesopotamian emperors connecting themselves to past rulers is especially prominent at the end of the third and the beginning of the second millennium BCE. In this light, it becomes clear that the antiquities displayed in ancient Mesopotamian temples were also used by the reigning king to associate with the glory of the past. This would make the possibility even more appealing that the Akkadian kings could have been recreated posthumously through images, as suggested by Eppihimer, especially in a more distant past in the early second millennium BCE. Such a need for connecting with the past is even more apparent when Nabonidus (556–539 BCE), often described as one of the first archaeologists, was conducting his excavations in the search for the Old Akkadian past. Here it also becomes evident that kings who were ascending to the throne from outside the main line of the reigning dynasty had the need to reaffirm legitimacy not solely through being an ideal king in the present but also through a connection with an idealized past. The phenomenon, to some extent, is still valid nowadays; for example, Barack Obama in his 2009 inaugural speech, “A New Birth of Freedom,” inspired by the Gettysburg Address, was connecting his presidency with that of Abraham Lincoln. Additionally, the reference to a common ancient heritage overshadowed different party affiliations as well as ethnic origins.

The conventions used in this volume are all appropriately chosen for a broad audience, without the insiders’ shortcuts comprehensible only to specialists; thus, the book is suitable for everyone who is interested in ancient empires such as Assyria and Babylon and their respective history and art. Furthermore, the fresh approach and original ideas provide a welcome addition to ongoing discussions in the field of ancient Near Eastern studies; therefore, this book will be a desideratum at any library specialized in ancient history and art.

Acknowledgments: The reviewer was partly funded within the Post-DocTrack program of the Austrian Academy of Sciences (OeAW) in 2020.

Book Review of Exemplars of Kingship: Art, Tradition, and the Legacy of the Akkadians, edited by Melissa Eppihimer
Reviewed by Bernhard Schneider
American Journal of Archaeology Vol. 125, No. 3 (July 2021)
Published online at www.ajaonline.org/book-review/4309
DOI: 10.3764/ajaonline1253.Schneider