A Companion to Linear B: Mycenaean Greek Texts and Their World. Vol. 3

A Companion to Linear B: Mycenaean Greek Texts and Their World. Vol. 3

This third volume in the series A Companion to Linear B was published in May 2014; Morpurgo Davies died four months later, on 27 September (vii). Her passing is a great loss. The volume consists of two chapters: “Mycenaean Writing,” a detailed holistic treatment of Linear B by Melena, and “Linear B and Homer,” a history of the “Homeric Question” by Bennet. Bennet’s chapter is short, but it gives a rich history of that branch of Homeric scholarship that focused on who “Homer” was, how the Homeric poems were composed, and what worlds they were describing. This review gives a detailed summary for those not immediately familiar with the scholars and the chronology involved. Melena’s chapter, conversely, is long and highly technical (see the “Glossary” [167–71]), but it lays out in detail precisely how each syllabogram functions and consequently what each was designed to do. The result is a series of grids that present “basic” and “supplementary” syllabaries with more precise phonetic understandings of the signs themselves; this review presents a single condensed version of these grids below.

Melena’s “Mycenaean Writing” (1–186) is divided into two parts: a short introductory section (1–26) and a long “in-depth picture” (26–163). The differences between Linear A (LA) and Linear B (LB) are “numerous and substantial” (7). Though the two syllabaries have approximately the same number of core signs, 20 are new to LB. Since “we do not have any independent evidence for the value of the Linear A signs” (9), Melena argues that “it is far from certain that … the vocalic values of both syllabaries were identical” (7).

Following this summary, a more detailed discussion strives “to reconstruct … the syllabary first used at the time of its creation. Needless to say, this involves a certain amount of speculation” (26). The two parts of the syllabary were created for different purposes and probably at different times: the basic 59–61 signs (“the basic phonology of Mycenaean Greek”) and the remaining subsyllabary (optional signs) (26).

Detailed discussions of the supplementary syllabograms follow (53–89). Sign *85 au/a4 is widely attested in initial position. Though the sign has a LA provenance, it is not used in non-Greek names; perhaps the sign had different values in LA and LB (59 n. 70). Mycenaean innovations include *71 dwe, *87 twe, and *91 two, all with specific uses, and *90 dwo, formed by two wo signs (and used as the monosyllable for “two”). Sign *48 nwa comes from LA.

The yodized series probably represents C+j/y+V. So *76 ra2 occurs with full spellings in -ri-ja (a-ke-ti-ra2, a-ke-ti-ri-ja); -RI-JA occurs in LA. For the voiced yodized labials, the defective series pa2??, pi2??, pu2 may depend on “the hypothetical three vowel system of Linear A” (71, but see his presentation of Linear A’s four vocalic positions [85] and below), although LA does not preserve words containing -PI-JV.

Melena discusses the 19 officially untransliterated signs in detail (82–8) and proposes a phonetic grid (88–9). Knossos and Pylos may have had their own local script. Signs *18, *47, *49, and *87 twe occur only at Knossos, and all have certain or possible LA predecessors. Signs *33 ra3, *91 two, and *92 sja??, however, are innovations at Pylos without LA predecessors.

Learning LB may have required a mnemonic device for memorizing the syllabograms, like the Japanese iroha for the kana script. The string di-we-si-po-ro-ti-mi-to-qo repeats on three tablets (PY Aq 218v, Tn 316r, and PY Xa 412v); it may be a conventional school exercise (cf. T.G. Palaima, “Scribes, Scribal Hands and Palaeography,” in Y. Duhoux and A. Morpurgo Davies, eds., A Companion to Linear B. Vol. 2  [Leuven 2011] 51–2 n. 30).

The reviewer now presents a consolidated grid (based on Melena’s figs. 17.2 and 17.5) that presents Melena’s full Mycenaean syllabary. 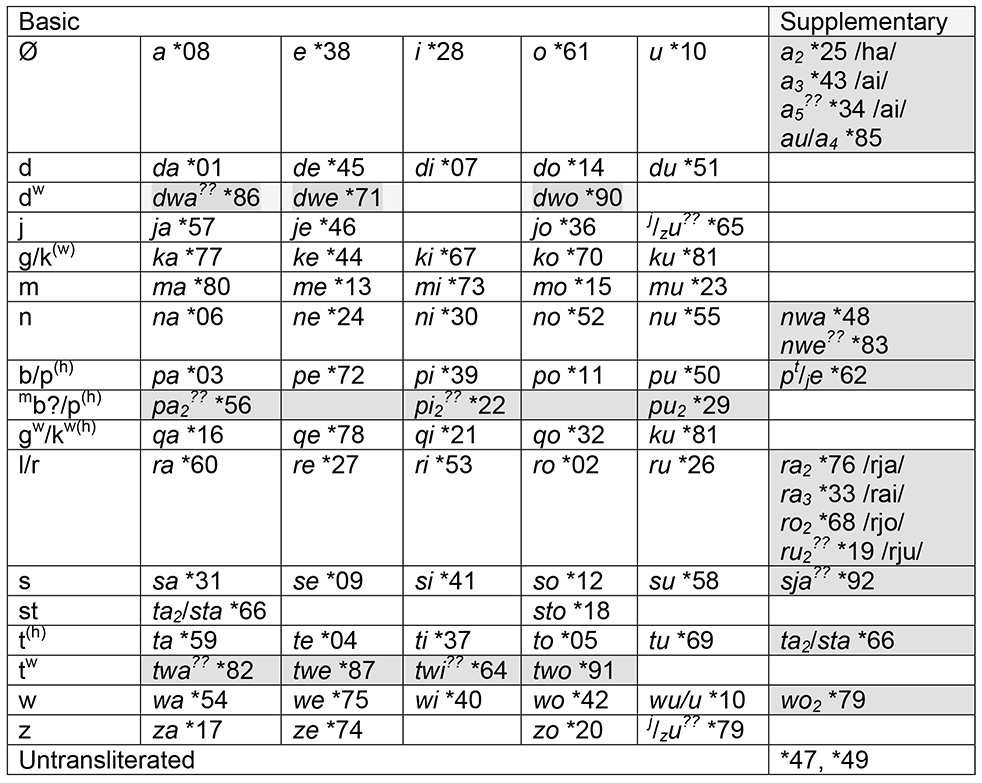 The second chapter, “Linear B and Homer,” by Bennet (187–233), distinguishes the content of Homeric texts (Trojan War, Odysseus’ travels) from “the context in which a text is produced”  (188 [emphasis original]). In antiquity, it was recognized that Homer lived after the Trojan War. “However, despite this separation, Homer’s works were regarded, from Antiquity to the 17th century of our era, as faithful representations of early Greece” (191).

Scholarship on the “Homeric Question” begins in the 18th century. To Abbé d’Aubignace (1715) and Giambattista Vico (1730), “the Homeric poems were the product of a collective” (192). Friedrich Wolf (1795) commenced a philological study of the text, not of Homer’s world. This led to two camps: “the ‘analysts,’ who emphasised inconsistencies in the text to argue for multiple authorship and multiple original poems … and the ‘unitarians,’ who stressed the essential unity of the Homeric oeuvre” (193). By the mid 19th century, Grote wrote that Homer was “dealing with a past which never was present” (History of Greece. Vol. 1 [London 1849] 59).

Schliemann turned all this upside down; he “effectively made Homer’s ‘past present’” (194). When Flinders Petrie (1890) demonstrated that the fall of Mycenae was contemporary with the Egyptian 19th Dynasty (ca. 1290–1190), he confirmed Eratosthenes’ date for the Trojan War (1194–1184 B.C.E.). This opened a gap between the end of the Bronze Age and the beginning of classical history. Arthur Evans’ discovery of Aegean scripts in Crete (1895, 1900) led Andrew Lang to suggest that the Homeric poems had been transmitted from the 13th to the 8th century, “preserved in Linear B on papyrus” (198). When Hittite was deciphered (1915), Achaeans could be recognized as Aḫḫijawa in the Tawagalawas letter (Forrer 1924).

In 1933 (summer) and 1934–1935, Milman Parry and his student assistant Albert Lord worked in Yugoslavia, “recording and transcribing oral poetry among the guslari of Bosnia”: it was obvious that the Homeric text had also “been composed orally” (200).

The LB decipherment in 1952 “opened up the possibility of reading documents of the time and thus comparing what they said directly with the picture presented in the Iliad and Odyssey” (202). Two years later, at the “Minoan Linear B Seminar” of 1954, Thomas B.L. Webster asked what the relationship was between the tablets and Minoan-Mycenaean civilization and Homer and the Trojan War.

Finley (The World of Odysseus [New York 1954]) had an answer: none. Homer was describing his own world of the 10th–ninth century. In “The Mycenaean Tablets and Economic History” (The Economic History Review, n.s. 10 [1957] 140), Finley states that “the discontinuty between the Mycenaean world and the Greek was so great that it is fruitless to look to the latter for guidance in the former”; and in From Mycenae to Homer ([London 1957] 159), he becomes more forceful: “Homer is not only not a reliable guide to the Mycenaean tablets; he is no guide at all” (203–4).

Others were not so dismissive. Lorimer (Homer and the Monuments [London 1950]) first offered “sustained explorations of the material world of the Late Bronze and Early Iron Ages read against the texts” (209). Page (History and the Homeric Iliad [Berkeley 1959]) saw in the Iliad’s “Catalogue of Ships” a “genuine Mycenaean ‘document’” (204).

Still, there was “a convergence of views shared among Mycenologists, ancient historians and archaeologists ... that rejected the Homeric corpus as a valid source for study of the Late Bronze Age” (206).

But the Late Bronze Age does point toward a Homeric reality. The Hittite texts reveal a network of sites in western Anatolia, including Millawanda/Miletos, Taruisa/Troia, and Wilus/Ilios (214). The land of Aḫḫiyawa “may well have referred to the southern mainland of Greece” (214). We have evidence for Homeric-style bards (J.G. Younger, Music in the Aegean Bronze Age [Jonsered 1998]) and “The Aegean Bard” (J.G. Younger, “The Aegean Bard: Evidence for Sound and Song,” in S. Morris and R. Laffineur, eds., Epos: Reconsidering Greek Epic and Aegean Bronze Age Archaeology. Aegaeum 28 [Liège & Austin 2007] 71–8), not only in the Pylos throne room wall painting but also in a tablet from Thebes (TH Av 106.7, ru-ra-ta-e, /lurastās/ [lyre-players]). And if the LB scribes were ethnic Minoans (Palaima [2011] 124) who could compose non-Indo-European daktylic hexameters (C.J. Ruijgh, “Mycenaean and Homeric Language,” in Y. Duhoux and A. Morpurgo Davies, eds., A Companion to Linear B. Vol. 2  [Leuven 2011] 257), then it is not surprising that we do find daktylic hexameters in LB (Younger [2007] 6–7 [PY Un 03.1]; Ruijgh [2011] 292–94).

Bennet points to the recentering of Mycenaean culture in the north in the 12th century, corresponding to the peripheral territories of the central Homeric heroes, Odysseus and Achilles, and perhaps explaining the early Aeolic elements in the poems (220–21). There may have been many Homers entailed in the composition of the Homeric poems.

This volume, with its so very different two chapters, is very satisfying to read. Melena’s contribution is a stunning intellectual challenge, and Bennet’s is pure literary pleasure. All Aegeanists should read this book.

Book Review of A Companion to Linear B: Mycenaean Greek Texts and Their World. Vol. 3, edited by Yves Duhoux and Anna Morpurgo Davies