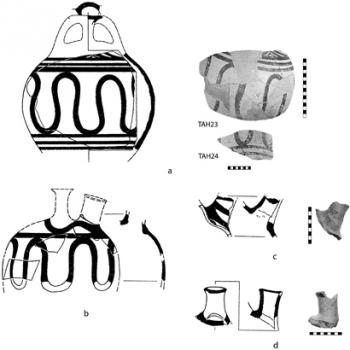 This article examines the issue of the distribution of transport stirrup jars found in the Late Bronze Age Levant. These vessels, representing long-range commodity exchange, are presumed to be largely of Cretan origin according to both their appearance and previous archaeometric analyses. However, determining whether non-Minoan sources of such vessels exist and identifying specific locales of production within Crete are ongoing foci of research. In this context, a group of transport stirrup jars from Late Bronze Age sites in Israel, predominantly from the harbor site of Tell Abu Hawam, was subjected to thin-section petrographic analysis. This group includes most of the examples known from this region. The results of the analysis indicate that a large proportion of the vessels, especially those found at Tell Abu Hawam, were produced in central or south-central Crete, although other Cretan and possibly non-Cretan sources also occur. A striking mirroring of this situation occurs on Crete at Kommos, a site exceptionally rich in ceramic imports of all kinds, including Canaanite amphoras produced in the vicinity of Tell Abu Hawam. Possible links between these two sites are discussed, shedding new and interesting light on the nature of bulk commodity exchange in the eastern Mediterranean during the Late Bronze Age.

More articles like this:
Cultural Interaction
Pottery
Trade
Near East

By David Ben-Shlomo, Eleni Nodarou, and Jeremy B. Rutter