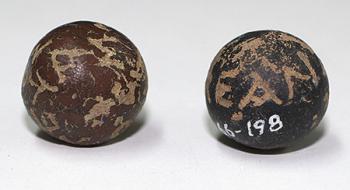 Although literary and epigraphic texts attest to the widespread use of random selection in the ancient Mediterranean, archaeological evidence beyond the Athenian-style kleroterion is rare. A recent discovery at Morgantina may improve this situation: a terracotta ball inscribed with a personal name was recovered in 2018 during excavations inside a house dated to the middle of the third century BCE. A nearly identical ball inscribed with a different name had been excavated in the 1960s in a nearby house of similar date. Here we consider them together, offering a first publication of the two objects and their inscriptions, including their onomastic and social significance. We argue that these objects most likely functioned as lots (κλῆροι) for sortition, based on a review of relevant evidence for the theory and practice of sortition from across the Mediterranean. We then discuss the historical context in which the lots were created, used, and discarded: decades of prosperity in eastern Sicily under the hegemony of the Syracusan monarch Hieron II (r. 269–215 BCE). We propose that the inhabitants of Hellenistic Morgantina may have employed random selection for distributing land during a period of demographic and urban growth generated by that prosperity.