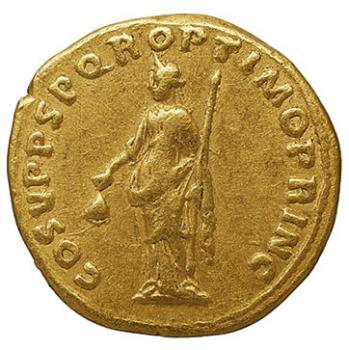 The significance of Libertas, the personification of the concept of libertas (liberty), on the Roman imperial coinage is typically interpreted as a retort to a maligned predecessor and as communicating a more constitutional mode of governance that includes cooperation with the senate (libertas senatoria). Indeed, Libertas often appears on the coinage when there is much contemporary political rhetoric about libertas in the immediate aftermath of the death of an emperor deemed to have been a tyrant, such as Caligula, Nero, and Domitian. Nonetheless, literary texts suggest that libertas need not refer exclusively to political freedoms or freedom from tyranny but could also be used in the context of freedom from financial burdens, especially taxes. Legends on some coins of Caligula and Galba explicitly connect the Libertas personification with freedom from taxes and customs duties. Libertas appears on the coins of Trajan and Hadrian, neither of whom succeeded maligned predecessors, and, as she does so only in specific years after their principates had commenced, her appearance may be linked with certain historical events. The presence of Libertas on the coinage of these emperors coincided with the forgiveness of tax debts and other coins marking the alimenta program, which provided financial support for the upbringing and feeding of the children of Italy.