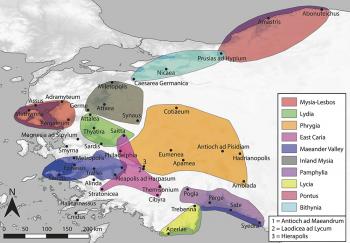 The use of the same obverse die by multiple cities in the Roman provinces has been much discussed from a numismatic standpoint, with particular focus on its implications for the system of coin production and for control of minting in the Roman provinces. Instead of considering die sharing as evidence to aid our understanding of the coinage, this article switches the focus onto the practice itself and examines it as a historical process in its own right. It examines how and why the practice came to be so widely adopted in the first half of the third century CE, using the spread of die sharing as a proxy for the spread of ideas. It reveals that the practice spread in a series of regional fits and starts, as the idea was experimented with by groups of cities, before being discarded and then often taken up again at a later point in time. In conclusion, I suggest that the explosion in use of shared dies in third-century CE Asia Minor can be better explained by connections between cities that were conducive to the spread of ideas than by any inherent benefit arising from the practice itself.