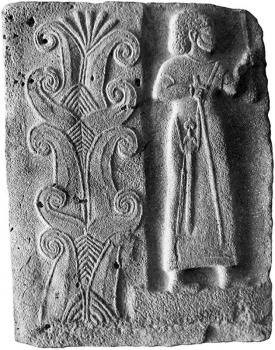 Monumental structures clad in relief-carved stone orthostats adorned cities across the fragmented political and ethnolinguistic landscape of the Iron Age Syro-Hittite kingdoms. This building practice passed down from the Hurro-Hittite Late Bronze Age evoked a collective memory of legitimate authority and was important for the construction of royal sovereignty. Differences among individual monuments suggest how Syro-Hittite rulers may have deployed monumental construction to navigate an “eventful” history by adapting it to current political exigencies. This article reevaluates the date of orthostats found in the South Gate of Zincirli, Turkey (ancient Samʾal), applying a seriation approach to the comparison of their stylistic details and iconographic themes and motifs with sculptural groups from other sites. The conclusion that the orthostats date to the early 10th century B.C.E. and are thus older than the ninth-century refoundation of the city suggests that they were recycled from an earlier Neo-Hittite site, proposed to be nearby Pancarlı. The appropriation of architectural spolia in the South Gate and the emulation or imitation of older works in the Citadel Gate by the founders of a new regime reveal a dialectic between the embrace and rejection of traditional Hittite sources of authority.