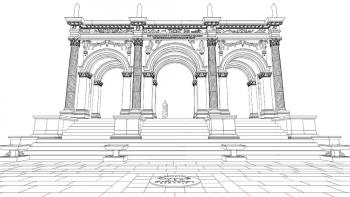 This article presents for the first time a complete discussion of the archaeological basis for the architectural form of the Arch of Augustus at Pisidian Antioch as excavated, recorded, and graphically restored by a University of Michigan team in 1924. A three-dimensional digital model of the excavated state of the monument, produced via analysis of archival photographs, supplements the discussion of the excavation archive. The results confirm that the overall form was a triple-bayed arch with four engaged Corinthian columns flanking the passageways, and that the arch stood atop a monumental stairway punctuated by four projecting pedestals and four small fountains. The blocks with sockets for the attachment of the dedicatory inscription are published, and alterations to the restored decorative program, including the addition of a combined representation of the clipeus virtutis and corona civica flanked by winged Tritons, are presented. Uncertain features, such as the articulation of the rear facade and the possible presence of a transverse passageway, are discussed. Finally, a review of evidence concerning the inscribed Res Gestae Divi Augusti shows that the inscription is likely to have been located not on the arch itself but rather on some nearby wall or monument.