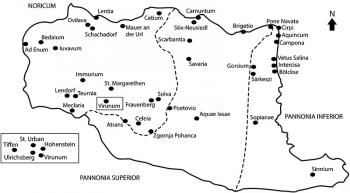 The abandonment and destruction of temples in late antiquity has become the subject of widespread discussion in recent years. However, the provinces of the Danubian frontier have been left largely understudied in this respect. This article seeks to add new data and observations to this debate by determining several points regarding the temples of Noricum and Pannonia, including when a decline in their construction becomes evident, how sources of temple benefaction alter over time, and how these changes relate to building work undertaken across the civic sphere. It also looks at the abandonment of temples, focusing particularly on when they became common sources of spolia for other building projects, what evidence there is for the violent closure of temples, and who might have been responsible for this. I argue that there is an evident decline in the construction and restoration of temples from the early third century onward, while temple building materials became increasingly used as spolia from the Tetrarchic period onward. I also show that the violent destruction of temples in the fourth century was uncommon, and, in instances where it did occur, the identity of the perpetrators is open to interpretation.