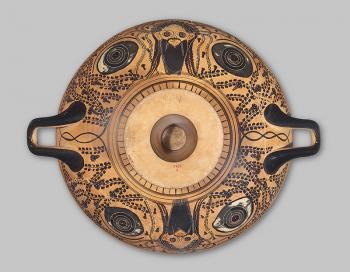 Since the late 1970s, scholars have explored Athenian eye cups within the presumed context of the symposion, privileging a hypothetical Athenian viewer and themes of masking and play. Such emphases, however, neglect chronology and distribution, which reveal the complexity of the pottery trade during the late sixth and the fifth centuries B.C.E. Although many eye cups have been found in Athens—namely on the Acropolis and mainly from late in the series—the majority come from funerary, sanctuary, and domestic contexts to the west and east. Most of the earliest, largest, and highest-quality examples were exported to Etruria, where the symposion as the Athenians knew it did not exist. Workshops and traders were clearly aware of their audiences at home and abroad and shifted production and distribution of vases to suit. The Etruscan consumers of eye cups made conscious choices regarding their purchase and use. Tomb assemblages from Vulci and elsewhere reveal their multivalent significance: they are emblematic of banqueting in life and death, apotropaic entities, likely with ritual uses. Rather than being signs of hellenization in a foreign culture, Athenian eye cups—like all Greek vases—were brought into Etruria, then integrated, manipulated, and even transformed to suit local needs and beliefs.