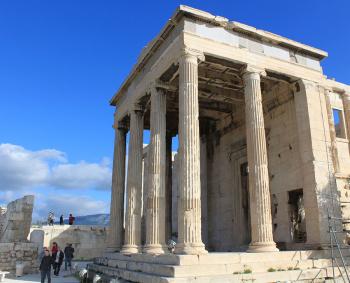 The north side of the uncanonical Temple of Athena Polias at Athens, conventionally called the Erechtheion, included a small paved court with banks of steps on the east and on the north against the Acropolis wall. The details of construction indicate that both the marble paving and the steps were built as part of the Erechtheion. This small, secluded North Court is a likely venue for the solemn ceremonies of the Plynteria and the Kallynteria, in which the ancient olive-wood statue of Athena Polias was taken out of the temple, bathed, and adorned. The unroofed, tightly integrated North Court reinforces the status of the Erechtheion as an innovative architectural composition.

By Mary B. Hollinshead