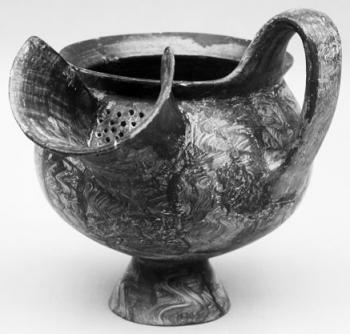 The Lydians originally lived alongside peoples of various ethnic cultures in an area surrounded by Ionia to the west, Phrygia to the east, Mysia to the north, and Caria to the south. This core territory expanded during Mermnad rule in the seventh and sixth centuries B.C.E., especially in the reign of Croesus (ca. 560–546 B.C.E.). Local pottery at the Lydian capital of Sardis is a starting point for identifying both the regional aspects of Lydian pottery and its eclecticism, which includes elements from eastern Greek and Phrygian pottery and common conventions of Anatolian painting. It might seem challenging and difficult to distinguish these individual elements, but this cultural mixing is exactly what characterizes Lydian pottery. This article explores the Phrygian features or influences on the Lydian painted pottery from Sardis.