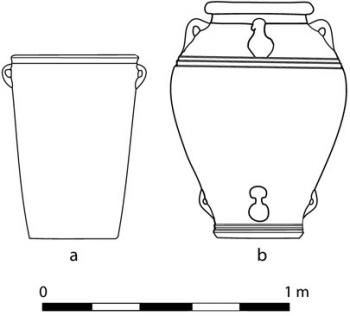 Toward the end of the third millennium B.C.E., Minoan funerary customs changed, and people began to favor the use of clay receptacles—pithoi or larnakes—for the bodies of the dead. This article offers a comprehensive study of the funerary pithoi of the period, comprising a review of the available material and its classification, distribution, and dating, the relation of container to tomb types, and the specific use of pithoi within funerary ritual. It also assesses the importance of pithoi as an investment in terms of the material wealth that they represent and the knowledge of the complex techniques of handling dead bodies that they require. Finally, it examines the symbolic connotations of the pithos and argues that its wide adoption was part of a general turn toward the concept of the regeneration of life. This concept shifted the emphasis of the funerary realm toward the social dimension—namely, toward the reallocation of the roles and resources of the dead among the living. Such a shift helped people come to terms with contemporary social reality and shaped the agency of emerging elites, which led to the establishment of the first Minoan palaces and transformed Crete from a series of kin-based communities to a group of proto-states.