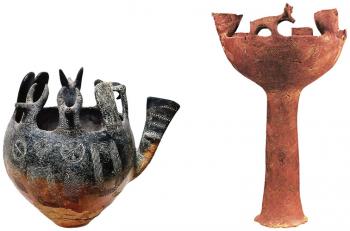 The homogeneous material culture that is characteristic of the earliest phase of the Cypriot Bronze Age (the Philia phase) broke down ca. 2300–2250 B.C.E. This change was prompted by the collapse of the eastern Mediterranean systems of interaction that provided the framework for the distribution of copper from Cyprus and in turn underpinned internal social and economic networks. Different responses to this event can be discerned across the island in the following Early Cypriot I–II period. On the north coast, elaborate pottery production and complex funerary practices suggest a more or less direct evolution from an earlier system founded on economic centrality to one in which status and authority were structured in different, ritually more complex ways. In contrast, the south coast and central lowlands took a different path. Here, ceramics and mortuary facilities characterized by informality and conformity suggest that social equivalence and inclusion were more important than the assertion of individual or subgroup status, perhaps signaling a return to earlier ideological structures.