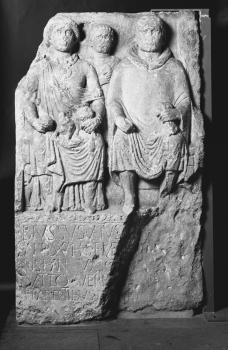 Roman funerary art in northern Gaul and the Rhineland reveals a variety of patterns in dress behavior. In some places, pre-Roman dress continued to appear in portraits until the late third century C.E., while many depictions show full Roman dress or combinations of Roman and indigenous garments. The most widespread and intriguing phenomenon observed in this study was a change in dress behavior as a result of Roman conquest; this change, however, did not involve the adoption of Roman dress but the development of a new, panregional native ensemble. Comparative work with anthropological studies of dress behavior in more recent contexts has enabled testing of hypotheses as to the meaning of this apparent “Third Way” in dress practice. The results reveal that the cultural consequences of integration into the Roman empire were more complicated than mere negotiations of place along a spectrum from native to Roman.