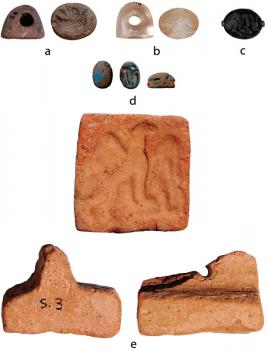 Excavations at the Late Bronze Age settlement and cemetery of Episkopi-Bamboula in the Kouris River valley laid the foundation for a stratified study of both the earliest writing on Cyprus (i.e., Cypro-Minoan script) and Cypriot seals, especially small stone cylinder seals and the larger wooden rollers used to make impressions, usually on pithoi. This reanalysis of Late Bronze Age seals and scripts from the Kourion area, which includes evidence from the settlement of Alassa, considers these signing systems within the broader social and artistic context of the Kouris River valley. The context and complexity of linear marking, together with the shapes and designs of seals, including recarved cylinder seals, shows how these tools of control were adapted over more than 500 years. Dramatic structural and iconographic changes in the 13th and 12th centuries B.C.E. at Episkopi coincided with the development and expansion of a monumental building complex at Alassa. While traditions of signing already in use at Episkopi—some for generations—were not fully displaced, a tool of administration shared between Episkopi and Alassa points to the development of the first documented regional bureaucratic system on Cyprus, which might have brought these settlements together within a single political system.