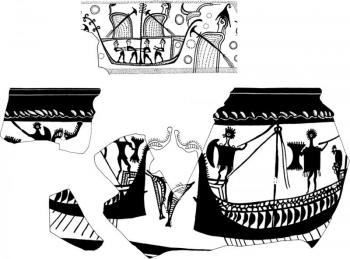 Reexamination of a well-known pictorial sherd from Ashkelon demonstrates that it is almost a century older than originally thought; it is in fact a 13th-century import from Mycenaean Greece rather than a local 12th-century Philistine product. The type of vessel to which the sherd belongs is discussed and a possible date is offered. The scene that might have been depicted is examined with reference to other representations of ships on ceramic vessels, particularly the ship that appears on a vase from Bademgediği Tepe, which is presented here with new sherds from the 2005 excavations included. This redating has consequences for tracing the development of ship iconography on ceramic vessels, since this representation is now one of the earliest Late Helladic III ceramic examples.