Over the course of January 1 to 3 in 2018, the Maarrat al-Nu‘man Museum, which houses the floor mosaics that are the subject of Abdallah’s book, was bombed for the third time since 2015. The town and its eponymous museum are located between Idlib and Hama in northwest Syria, an area at the center of the Syrian War. Despite the remarkable efforts of museum staff, archaeologists and heritage experts, and local volunteers to protect the museum, the airstrikes caused serious damage to the museum building, a 16th-century Ottoman caravanserai, and its mosaics (see J. O’Connell, “Incident Report Feature: Ma’ara Museum,” n.d., for a report on the bombing). On 29 January 2020, Syrian troops recaptured Maarrat al-Nu‘man. The current condition of the city’s museum has not been independently confirmed. As the circumstances described make clear, Abdallah’s book serves as an enduring historical record of a corpus of Late Antique mosaics whose state of preservation is uncertain.

Many of these mosaics were either unpublished or only briefly referenced in publications with other, often broader, aims. In the volume under review, Abdallah expands his doctoral thesis on the mosaics in the museum into a comprehensive catalogue raisonné that now includes information on their discovery, archaeological excavation, and original architectural context. The author suggests that close analysis of the decorative, iconographic, and epigraphic repertoires of the mosaics can illuminate local, regional, and transregional developments in mosaic production. Further, he proposes that an evaluation of the collection as a whole using the same methodology establishes the basis for dating the mosaics and identifying local workshops. The front matter of the book includes a forward and introduction written by Abdallah, a preface written by Jean-Pierre Sodini, and a tribute to Kamel Chéhadé, who founded the Maarrat al-Nu‘man Museum in 1987, written by Janine Balty. The body of the book is divided into three sections: on mosaics in religious buildings (all of the buildings are churches with the exception of one monastery); on mosaics in public and domestic buildings; and on mosaics from indeterminate architectural contexts, which are divided into two categories: known and unknown sites. The book ends with a brief conclusion, an index, and a bibliography.

Most of the mosaics come from nearby villages or sites in the northern provinces of Hama or Idlib. While mosaics excavated in the urban centers of Antioch and Apamea have been well documented and extensively published, Abdallah’s work makes plain that mosaics uncovered in rural areas of northern Syria have not attracted similar levels of interest or, most importantly, financial support for their archaeological excavation and documentation. From the first several entries in the first section, it becomes clear that most of the mosaics were taken to the museum after coming to light on private property, sometimes beneath houses, or were uncovered during public works and construction projects. At least one pavement was the subject of attempted looting and was hastily moved to the museum for safekeeping. The salvage excavations consisted mainly of clearing debris from the mosaics, lifting them (or the portions of them deemed significant), and transferring them to the museum, where they were treated by conservators. Proper excavation and documentation of the mosaics and associated sites rarely occurred, and this has profound consequences for scholarly use of and research on the collection, as is evidenced by the limitations of Abdallah’s own presentation and analysis of the mosaics. The lack of information about context and dating illustrates the problems well. First, mosaics from indeterminate architectural contexts (in section three)—regardless of whether or not the village or area in which they were found is known—cannot improve our knowledge of the buildings or structures in which they were installed and thus cannot contribute to our understanding of the mosaics’ relationships to the individual or communal activities, practices, or rituals that took place in the spaces they paved. Second, out of all the mosaics in the catalogue raisonné, only eight churches have mosaics that can be securely dated; these contain dedicatory inscriptions that include the dates when the floors were laid. Other than these, in the absence of archaeological records from stratigraphic excavations of the sites, the author had no means for dating mosaics beyond comparison of their designs, iconography, and style with other mosaics in the collection, in Syria, and in the wider Near East, which is a subjective and inexact method.

Despite the considerable constraints on his work, Abdallah has endeavored to do as much as possible with the mosaics in the Maarrat al-Nu‘man Museum’s collection, including using the mosaics to clarify the plans of buildings when the architecture is not preserved, as for example with the church at Altamani‘ah (31–45). The catalogue entries are arranged in alphabetical order within each section according to the name of the site or village where the mosaic was discovered (except for the group of mosaics for which the sites are unknown). The circumstances of its discovery, if known, are reported; its location and manner of presentation in the museum are provided; and the original architectural context, if known, is described. The author provides meticulous descriptions of the formal qualities of each mosaic and analysis of the composition, iconography, style, and quality by comparison with local and regional parallels. Abdallah offers interpretations of some of the mosaics; however, in some cases, the interpretations are not fully realized. For instance, the author proposes that a square panel from the church at Maarrat Bitar likely paved a baptistery (115–18). The composition of the mosaic supports his proposal. In the bottom register is a large amphora at the center flanked by symmetrically arranged birds and sheep (fig. 1). In the top register, an eagle is placed at the center with symmetrically arranged birds and deer to either side. As Abdallah observes, in certain contexts eagles symbolize Christ and vases represent the water of life or the Jordan River. The author mentions in passing the presence of a single bird, perhaps a dove, next to the eagle, but he does not connect the disruption of the otherwise strictly symmetrical arrangement of pairs of animals with biblical accounts of the descent of the Holy Spirit like a dove during Christ’s baptism, which lends strength to his interpretation. 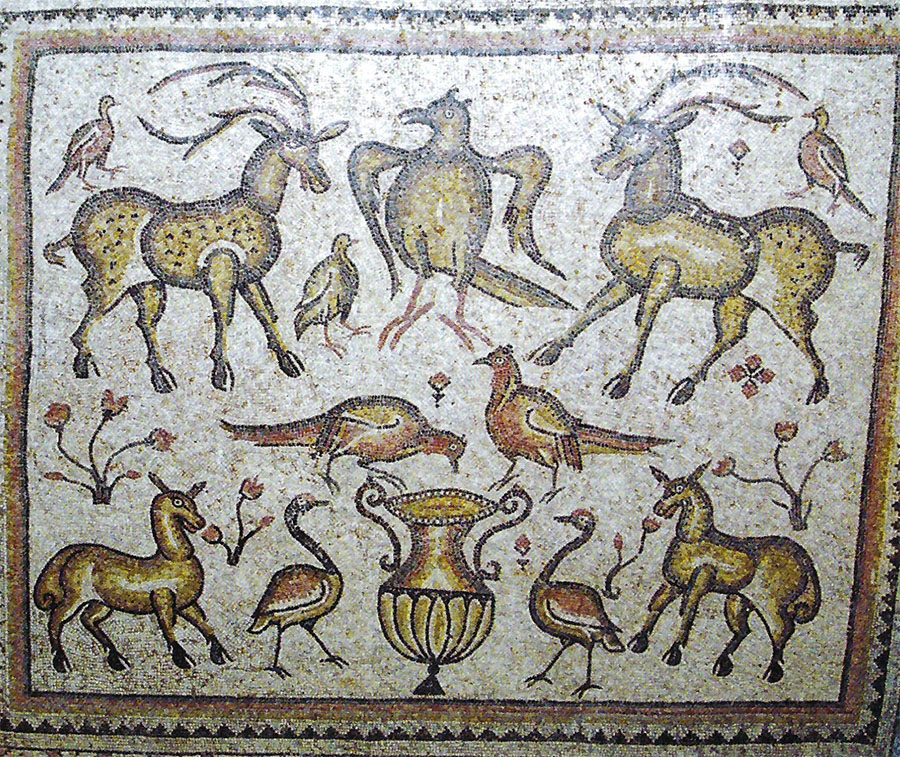 Overall, the developments in the design, iconography, and formal elements of the Maarrat al-Nu‘man mosaics are consistent with floor mosaics throughout the Near East. The museum’s mosaics contain features and themes that are strikingly similar to Late Antique mosaics discovered in rural areas of Arabia and Palestine. For example, they demonstrate that rural communities, like their urban counterparts, had an interest in classical myths and traditions, as attested by the scene of the she-wolf suckling Romulus and Remus from the monastery at Frikya. Furthermore, the mosaicists frequently used visual formulas drawn from classical art, such as personifications, including Ge, the Months, and the Seasons in the South Church at Ma’arrata, the House of Oum Jalal, and a mosaic medallion from Fa‘loul (architectural context unknown). The mosaics from the churches at Altamani‘ah, Tell ‘Ar, and Tell Khanzir contain depictions of the Anastasis aedicule from the Church of the Holy Sepulchre. A similar interest in sacred religious edifices, namely the Church of the Holy Sepulchre and the Jewish Temple, is observed in church and synagogue pavements throughout the region and corresponds to a general interest in the representation of cities and their architecture in Late Antique mosaics. The Syrian mosaics presented in Abdallah’s book underscore the shared artistic heritage of the Near East and, especially, the degree to which the inhabitants of rural areas across the region sought to share in the cultural and religious developments of major urban centers in late antiquity. As powerful agents of individual and communal self-fashioning, mosaics were used to forge a link between rural and urban environments, a connection that would have offered rural communities an important sense of belonging.

This book is intended for specialists of Late Antique mosaics in the eastern Mediterranean. It assumes a high degree of familiarity on the part of the reader with the mosaics and the geography of the region and, thus, includes neither illustrations of the comparative material nor a map identifying the locations where the Maarrat al-Nu‘man Museum’s mosaics were uncovered. There are an unfortunate number of a copyediting errors in the text and in the image captions, as well as one missing image.