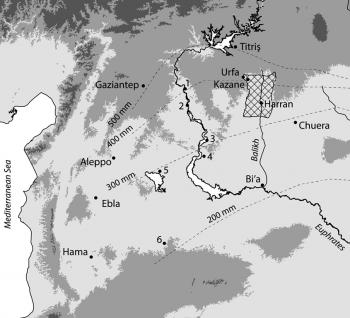 The rapid development of cities across Upper Mesopotamia in the third millennium B.C.E. transformed the landscape. Newly formed, densely populated cities concentrated population and resources, and a multitiered settlement system emerged to maximize agricultural production. The cities of Kazane and Harran shared the Harran Plain of southeastern Turkey, a large inland area with optimal dry-farming conditions. I argue that these cities arose as peer polities that shared the resources of the plain even as they likely competed for political and economic influence. I show this process through analysis of settlement patterns in the Harran Plain from the Neolithic to the Islamic period. Calculation of the agricultural sustaining needs of these cities reveals a multitiered supply structure indicative of agricultural intensification. This work is significant because it evaluates the quality of Harran Plain survey data, and it expands and situates these data in the context of Upper Mesopotamian urban settlement systems. For the Early Bronze Age, the results are consistent with models of urban-center food supply in dry-farming environments, but they raise the question of how as-yet undocumented irrigation or herding may have altered the size of sustaining areas.