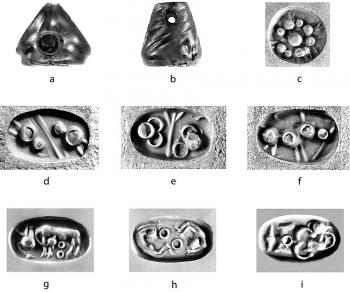 A boundary between eastern and central Crete has been proposed for the Protopalatial period on the basis of the distribution of various types of material culture, most notably pottery. The distribution of Protopalatial seal groups, the production of which can be localized to specific regions on the island, is here added to this discussion. Malia and eastern Crete show a preference for prismatic seals with hieroglyphs and pictographic images, whereas central Crete produces mainly seals of other shapes with round seal faces and ornamental motifs. Evidence from seals is discussed in conjunction with evidence for the earliest attestations of script in Crete. From this perspective, a hypothesis is here suggested that, in contrast to what was previously thought, in Middle Minoan I/II Cretan Hieroglyphic was “at home” in Malia and the eastern part of the island, while Linear A was native in southern and possibly north-central Crete. In this context, the Hieroglyphic Deposit of Knossos is seen as intrusive in north-central Crete. This article explains the presence of Hieroglyphic documents at Knossos on the basis of theories that view the Minoan palaces as ritual centers potentially open to corporate groups from various regions on the island.