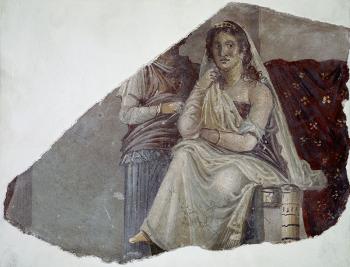 This article documents the unusual case of a literary graffito quoting Ovid’s Heroides 4. The graffito was inscribed on a myth painting in Pompeii, preserving a historical individual’s reaction to the painting. I approach this case two ways: first, treating the painting and poem as an “intertext” using formal iconographic and literary analysis; second, exploring the archaeological record for the house, including its assemblage of artifacts and all other graffiti discovered within. The house was modest, and many residents and visitors were of lower status. Nevertheless, the graffiti reveal dialogic wordplay and show that many people in the house recorded their presence through acts of informal writing. This case suggests that discursive viewing—in which the viewer played with visual stimuli to show off knowledge through allusion—was not limited to the educated elite but was open to any with the will and wit to participate. By bringing literary (and other) material to bear on the painting, viewers allowed the mythological figures to “speak,” thus precipitating the dramatic conclusion of the story depicted.