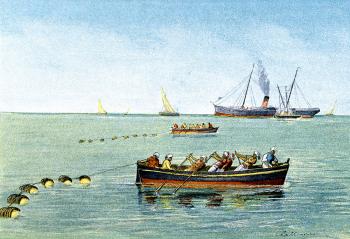 The relationship between connectivity and economic activity is a subject of current debate in Mediterranean archaeology, and recent scholarship has shown the significance of this topic for North African studies. This article approaches the issue through a body of evidence that has hitherto been overlooked: artificial port structures, such as jetties, quays, enclosures, and breakwaters. I identify 29 definite, and 16 possible, structures between Cyrenaica and Mauretania Tingitana dating between the fourth century B.C.E. and the sixth century C.E. I demonstrate that the archaeological evidence for these structures is a more reliable source of information than the ancient literary evidence and discuss how the picture drawn from the latter has misled earlier scholars. I argue that wharf length is the best measure of the size of port structures, and I use that concept to outline the role that individual ports and broader regions played in Mediterranean commerce. By relating artificial port structures to the major production centers of exported goods, I enhance the picture of the North African economy both before and during the Roman empire.