All’s Well That Ends Well: Sardis at the Victoria and Albert Museum

All’s Well That Ends Well: Sardis at the Victoria and Albert Museum 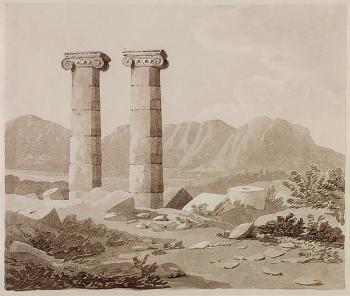 The Victoria and Albert Museum in London owns two watercolors that depict the Temple of Artemis at Sardis with its two fully standing columns as they appeared in the early 19th century. The museum catalogue stated that the finer of the two, showing a dramatic stormy view by Clarkson Stanfield (1834–35), a prominent artist who had never been to Sardis, was based on the second, a crude sketch allegedly made on the spot by one “Mr. Maude,” otherwise unknown. Stanfield’s picture shows construction and ornamental details unique to the Sardis columns and capitals, while the “Maude” shows none of these nor does it present a correct view of the landscape. Since it became clear that the Maude watercolor could not have served as a model for Stanfield, our findings were presented to the museum, whose Prints and Drawings Department specialists, after some scholarly communication, graciously acknowledged the mistake and proceeded to amend the catalogue. This is gratifying. Nevertheless, this incident offers an opportunity to underscore the benefits of multidisciplinary cooperation. In the larger picture, we specialists of kindred disciplines—archaeologists, art and architectural historians, and museum curators—share the same goals and possess knowledge and values worth sharing.