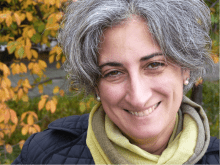 Athena Tsingarida is Professor of Ancient Greek art and archaeology at the Université libre de Bruxelles, ULB. She holds BA and MA degrees in classical archaeology and Byzantine studies from the Université libre de Bruxelles and a doctorate (DPhil) in classical archaeology and ancient history from the University of Oxford (Wolfson College), where she studied with a Cecil Rhodes Scholarship. She was senior associate member of the American School of Classical Studies at Athens (2006–2007) and was appointed T.B.L. Webster Fellow at the Institute of classical studies, University College London (2014–2015). A specialist in archaic and classical Greece, she published widely about ancient Greek pottery, cultural interactions throughout the Mediterranean world, and the reception to classical art in nineteenth-century Europe. A field archaeologist, she undertook excavations and field study in Greece (Siphnos and Crete) and Syria (Apamea). She is currently co-directing (with Didier Viviers) the excavations and restoration works at the Necropolis of Itanos (Eastern Crete).