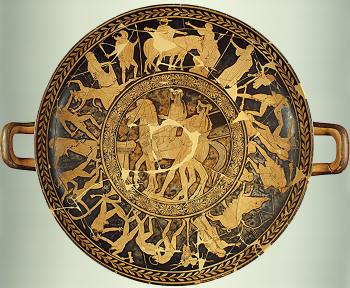 This article discusses a distinctive class of Athenian figure-decorated vases consisting of a few black-figure and red-figure cups and some phialai that are dated to the sixth and fifth centuries BCE. All are large, and some are huge, with diameters varying between about 35 and 56 cm. After tracking the shift in the distribution of these vessels from the late sixth century on, from Greek contexts to a concentration in southern Etruria, the article examines several case studies based on reconstructed material assemblages from Etruscan sanctuaries and graves in order to better understand the part played by the purchasers in the local reception and use of these monumental Athenian vases. I attempt to go beyond earlier explanations that see these objects as exchange gifts reflecting the prestige of the aristocratic owners and to demonstrate how this distinctive class of pottery responded to a variety of indigenous needs, practices, and interpretations.