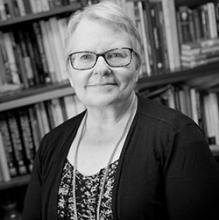 Naomi J. Norman was Editor-in-Chief of the AJA from 2004 to 2013. She has a long record of departmental, university, and professional service. She was Vice President for Publications of the AIA, has been a member of the AIA lecture circuit since 1991, and is active in the governance of the American School of Classical Studies at Athens. She is currently associate vice president for instruction at the University of Georgia (UGA) and directs the university’s Reacting to the Past program. Naomi was awarded the M.G. Michael Award for Excellence in Research from UGA, was named Josiah Meigs Distinguished Teaching Professor in classics, and has received major grants, awards, and fellowships from the American Philosophical Society, American Council of Learned Societies, Parker Center at Brown University, the National Endowment for the Humanities, Earthwatch, and the Kress Foundation. She has excavated extensively at Classical-period sites in the Mediterranean and has been directing excavation projects in Carthage, Tunisia, since 1982. She has presented more than 60 lectures, workshops, and papers and has authored numerous major articles or book chapters on a variety of archaeological topics as well as excavation reports and book reviews.