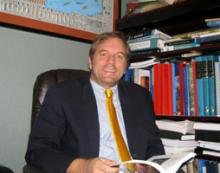 During his master’s studies, Jeffrey G. Royal excavated in Calabria and refined his interests in the Roman economy and technology. This interest led him to Texas A&M University, where he received his doctorate and participated in field projects in Turkey, Israel, and Morocco. Royal took the position of Archaeological Director at RPM Nautical Foundation in 2003 and has directed projects in Sicily, Calabria, Campania, Turkey, Albania, Montenegro, Croatia, Morocco, Spain, and Tunisia. His current research includes amphora morphology related to overseas exchange, the Roman annona, the study of ancient warships and tactics, and Illyrian coastal trade in the Roman era.