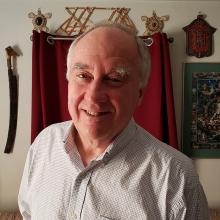 Steven Sidebotham is a professor in the History Department at the University of Delaware. His major research interests include all aspects of commercial and cultural exchanges between the classical Hellenistic-Roman world and the Red Sea/northwest Indian Ocean. He has engaged in archaeological projects since 1972 both on land and underwater in various capacities. He has been co-director of the excavations at Berenike, on the Red Sea coast of Egypt, since their inception in 1994.