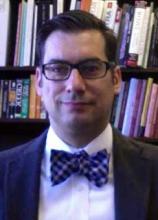 Spencer Pope is an assistant professor in the Department of Classics at McMaster University (Hamilton, Ontario, Canada) and received a Ph.D. in classical archaeology from Brown University in 2006. His research focuses on Greek architecture, urbanization, and the development of the built environment with special interest in the expansion of the Greek world and the establishment of overseas settlements in Sicily and South Italy. He has excavated extensively in Italy and is currently completing a monograph on the frontiers of the Greek cities of Sicily in the Archaic and Classical periods.