On 27 July 2016, Professor Emeritus Charalambos Bouras passed away, leaving behind an incomparable legacy of important scholarly contributions. His impressive output in the history of ancient and medieval architecture of Greece—his field of specialization and teaching at the Polytechnic School of the Aristotle University of Thessaloniki (1966–1974) and the National Technical University of Athens (1974–2000)—is equaled by his formative role in the scientific field of preservation and restoration of architectural monuments. As a practitioner and teacher of historic preservation, Bouras is credited with having shaped the generation of specialists active in architectural restoration in Greece today. It is not an exaggeration to state that around Bouras’ personality pivots an internationally radiant “school” of practitioners—all his students—currently active in the domain of architectural preservation and restoration. The empirical testing ground of this school is the exemplary restoration of the Athenian Acropolis monuments, which began in the 1970s and to which Bouras contributed first as a member and then as chair of the Committee for the Conservation of the Acropolis monuments (fig. 1). 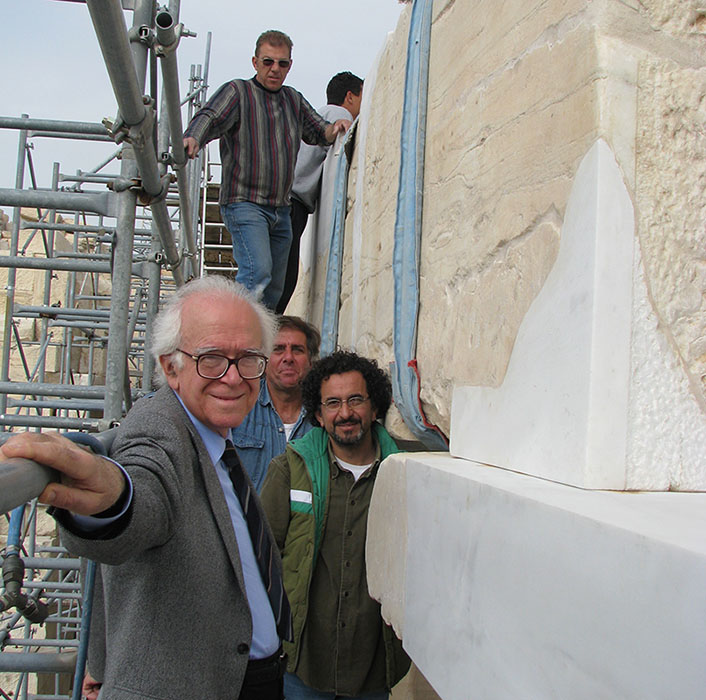 This project bears his indelible thumbprint and will be celebrated as his life’s work for a long time to come. No less important, however, are a host of other projects of preservation and restoration throughout Greece (e.g., the marble iconostasis of the Nea Moni at Chios, the odeion of Herodes Atticus in Athens, and the restoration of the trapeza [refectory] at the monastery of Hosios Loukas in Boeotia).

In 1957, following an Architect Engineer degree at the National Technical University of Athens (Polytechneion), Bouras joined the Greek Archaeological Service as a member of the Directorate of Restoration of Ancient and Historic Monuments. In this role, he undertook the study and restoration of the fifth-century B.C.E. stoa at the Sanctuary of Artemis at Brauron (1961–1962), an exemplary work that embodies his deep knowledge of archaeology, his philosophy of restoration, and his principles of intervention (fig. 2). 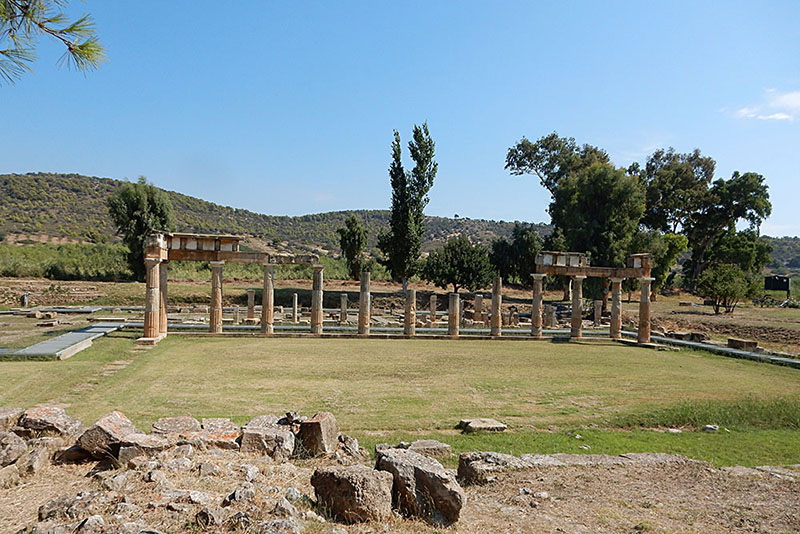 The last are premised on the application of interdisciplinary methodologies for the painstakingly detailed documentation of a monument and its needs before intervention; the formulation of clear structural, pedagogical, and aesthetic goals in tandem with clearly laid out strategies and plans of intervention; the principle of reversibility of any addition or intervention to the structural fabric of a historic monument; and the imperative to publish scientifically all research conducted in preparation for the restoration and preservation of a monument.

By the time of his appointment at the Polytechnic School of the Aristotle University of Thessaloniki, Bouras had achieved the rare distinction of having completed two doctoral degrees. In 1964, he received a doctorate in the history of art from the Université de Paris (École Pratique des Hautes Études) under the supervision of André Grabar.1 In 1966, he received a second doctorate from the Polytechnic School of Thessaloniki.2 His two dissertations, along with his monograph on the stoa of Brauron,3 stand at the beginning of a prolific publication record that has shed original light on a variety of monuments and on problems of archaeology and architectural history.

Bouras’ field of expertise extended from classical antiquity to Byzantium and modern Greece. He coauthored (with Korres) the first volume on the restoration of the Parthenon4 and also is author or coauthor of a plethora of scholarly articles on the restoration work of the Acropolis monuments. His contributions to the study of medieval architecture and the urbanism of Greece are too numerous to be included here, but his monographs on the history and architecture of Nea Moni at Chios and on 12th-century church architecture in Greece stand out as seminal contributions to the field of architectural history.5 More recently, he published important studies on the architecture of the monastery of Hosios Loukas in Boeotia (fig. 3) 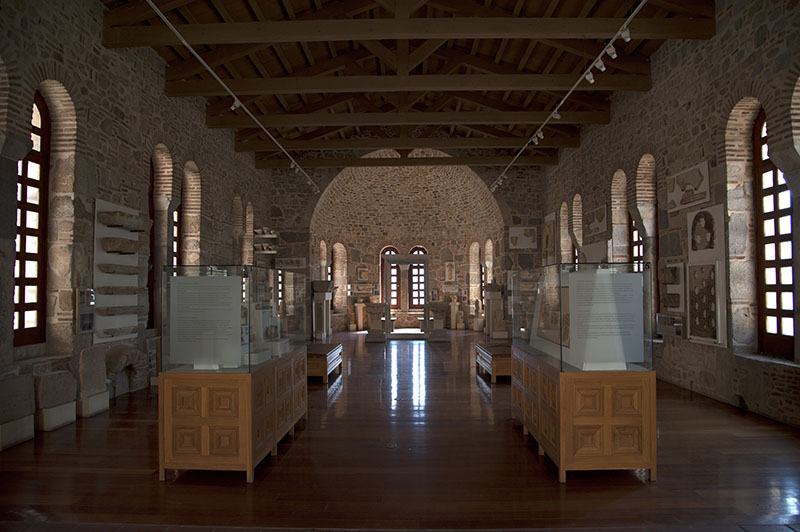 and on aspects of topography, urbanism, and architecture in medieval Athens.6

A gentleman in mind and spirit, Bouras was a man of low tones who cared deeply about the study, preservation, and restoration of the monumental heritage of Greece from antiquity to the present. His academic teaching set new standards for the scholarly analysis of historic monuments, not least through the institutionalization of rigorous graduate programs and the founding of the Historic Archive of Monuments at the Polytechneion of Athens. He was judiciously and constructively critical of his students and associates and steered the Committee for the Conservation of the Acropolis Monuments with patience and sound judgment.

During his career, Bouras worked with zeal as a member of the Central Archaeological Council of Greece and the administrative committee of the Benaki Museum. He was also a member of the committees that oversaw restoration work on monuments at Epidauros as well as the Temple of Apollo Epicourios at Bassae. He was a corresponding member of the Academy of Sciences and Arts of Serbia and of the German Archaeological Institute. He has received multiple honors, most notably the Medal of the Commander of the Order of the Phoenix of Greece.

Bouras’ pioneering contributions to his field and to Greek society in general are far-reaching. They are succinctly epitomized by Korres’ characterization of Bouras as a “῝Hρως Kτίστης” (founding hero).7 This is an apt characterization for an exceptional man who combined the resilience of a hero with the intelligent vision of a founder.

Korres, M., and C. Bouras. 1983. Μελἐτη αποκαταστἀσεως Παρθενὠνος. Athens: Ministry of Culture and Sciences: Committee for the Conservation of the Acropolis Monuments.