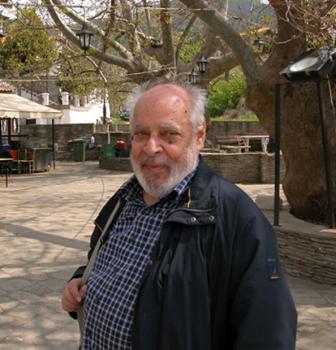 Georgos I. Despinis, professor emeritus at the Aristotle University of Thessaloniki and distinguished scholar of Greek sculpture, lost his battle with cancer on 13 September 2014. He was 78. Born on Tenos, he grew up inspired by the work of sculptors on this marble-rich island. Despinis made many important discoveries that resulted from his deep knowledge of marble and the manner of working it. His understanding of ancient sculpture was combined with an unusually visual memory and a clear sense of sculptural forms. He was a very warm person who conveyed a passionate love of his subject. Despinis will long be remembered as an inspired teacher, a vibrant lecturer, an animated respondent at conferences, a prolific scholar, and a devoted friend of his many close colleagues.

Despinis studied at the University of Athens, where he received his diploma in 1958. He was such an exceptional student that his professors, Nikolaos Kontoleon and Anastasios Orlandos, chose him to be the assistant for their excavations on the island of Naxos and in ancient Messene in the Peloponnese. After completing his military service, he studied in Germany (1962–1964), first at Freiburg with Walter-Herwig Schuchhardt and then at Saarbrücken with Nikolaus Himmelmann. He then returned to Greece, where he held “temporary” appointments in the National Archaeological Museum of Athens under Christos Karouzos and Semni Karouzou and in the Archaeological Museum of Piraeus. He held regular appointments with the Archaeological Service in Thessaloniki (1967–1971) and subsequently in Piraeus (1971–1972), devoting himself to the sculptural exhibitions in their museums, thereby learning a great deal about ancient Greek sculpture. In 1970, he completed his doctoral degree at the Philosophical School of the Aristotle University of Thessaloniki with a dissertation on the cult statue of Nemesis at Rhamnous in Attica. He taught at the Aristotle University of Thessaloniki from 1972 to 1984 and resigned the position to devote himself to his research and establishing his home in Athens.

One of Despinis’ great gifts was the ability to visualize three-dimensional sculpture from the smallest fragments and to make joins and associations among them, as with his reconstruction of the cult statue of Nemesis at Rhamnous, which he published in a revised version one year after completing his dissertation.1 He restored this statue from fragments that were kept at Rhamnous and in the storerooms of the National Archaeological Museum of Athens, associating it with a statuary type known from a series of copies dating to the Roman period. His work became the foundation for the study of Agorakritos and the later fifth century B.C.E.

An equally important talent was his ability to read and extract meaningful information from 19th-century museum records, daybooks, and markings on sculptures, as demonstrated in his books on high-relief friezes from second-century C.E. Athens, on sculptures in the Archaeological Museum of Megara, and on selected reliefs in the National Archaeological Museum of Athens.2

Despinis’ sculptural interests ranged widely, extending from acroliths and Parthenon studies3 to architectural sculpture, funerary reliefs, and sculptors of the Hellenistic period.4 His close observation of sculptural details also resulted in studies of individual sculptures, such as the Hermes of Troezen, the so-called Protesilaos in New York, the Barberini Suppliant, and the ephedrismos group in the Capitoline Museum in Rome.5 Through brilliant detective work with photographs of the mid 19th century, he associated a colossal head with the cult statue by Praxiteles mentioned by Pausanias (1.23.7), which was set up in the Acropolis Sanctuary of Artemis Brauronia.6

Despinis also became involved with issues of repatriation. He spotted the link between a funerary stele excavated at Porto Raphti and a relief fragment in the collection of Leon Levy and Shelby White, and he was instrumental in effecting the return of the fragment to Greece in 2008. It is now exhibited with the joining stele in the Archaeological Museum of Brauron. Over the last few years, he had also been preparing a catalogue of sculptures in that museum. Some of his studies on the Brauronian material appeared in 2010.7

Despinis’ support of collaborative work was invaluable. He initiated the creation of new, detailed catalogues of the sculpture collection of the Archaeological Museum of Thessaloniki. Three of the projected five volumes are published, and the fourth is nearing completion.8 He organized new investigations of the archaic sculptures in the National Archaeological Museum of Athens. He was able to see the resulting volume in print during his last weeks, and he was well pleased with it.9

Despinis played an important role as a member of the Committee for the Conservation of the Acropolis Monuments. He lent his insights on sculpture to the formulation of many museum displays, most recently to that of the Archaeological Museum of Kalymnos, which opened in 2009.

In recent years, Despinis’ work was recognized by a series of major awards. In 2007, the Academy of Athens presented him with its silver medal for Letters and Arts in recognition of his important contribution to archaeological research. In 2009, the Benaki Museum honored him for his work and for his many scientific and scholarly publications. He was elected a member of the Accademia dei Lincei in Rome, of the Deutsches Archäologisches Institut, and of the Archaeological Society at Athens.

Many classical archaeologists in Greece felt a close personal attachment to Despinis, who inspired devotion among his many former students and colleagues. His regular place in the library of the Deutsches Archäologisches Institut, which he occupied for 30 years, remains empty, marked by a pile of flowers. He will long be missed.