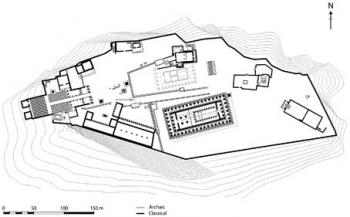 For the first time, the role of the night sky in the performance of nocturnal festivals in ancient Greece is considered. This study presents a reconstruction of the Athenian night sky as it would have been visible from the Acropolis during the celebration of the Panathenaia. A link is suggested between the timing of the festival, held on the Acropolis, and the movement of the constellation of Draco, which would have been visible in the night sky during this time. This association is supported by the half-human half-snake early Athenian kings, the myths associated with the festival, the snake that lived in the Erechtheion crypt, and the role of Athena in the Giantomachy. The visible surroundings of the Athenian Acropolis that participants of the nocturnal rites would have seen offer a more nuanced understanding of the relationship between Greek cosmology, astronomy, and ritual practice.