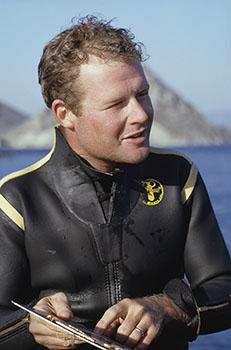 On 2 March 2021, George F. Bass, acknowledged around the world as the founding father of underwater archaeology, died in Bryan, Texas, at the age of 88. Ann Singletary Bass, his wife and steadfast partner of 60 years, was at his side.

Bass was born in Columbia, South Carolina, on 9 December 1932 to parents Robert Bass and Virginia Wauchope. His father was a professor of English literature and his mother an anthologist of poetry; both were published authors, and their shared affinity for the English language was a source of family pride. Bass studied English literature at the University of Exeter and earned a master’s degree in Near Eastern archaeology from Johns Hopkins University (1955). As a student at the American School of Classical Studies at Athens (1955–57) he helped excavate the House of the Tiles at Lerna with Jack Caskey and worked at Gordion with Rodney Young. After serving his country as a U.S. Army first lieutenant in South Korea (1957–59), Bass pursued a doctoral degree in classical archaeology at the University of Pennsylvania (1959–64).

In 1960, Bass made two wise and life-changing decisions. The first was to make a proposal of marriage to Ann Singletary. The second was heeding a directive from Rodney Young, who encouraged him to direct the excavation of a Bronze Age shipwreck identified by sponge diver Kemal Aras and photo­journalist Peter Throckmorton the preceding year at Cape Gelidonya, Turkey. The result was the first scientific excavation of an ancient shipwreck by a small team of archaeologists who, rather than supervising excavation from the surface, dived themselves and assumed direct responsibility for uncovering, mapping, and raising artifacts.1 Bass and his team demonstrated that the objectives and accuracy of terrestrial archaeology could and should be applied under water. The impact of the Cape Gelidonya shipwreck continued to be felt after the pioneering 1960 excavation. Bass observed that pan-balance weights found in the wreck adhered to Near Eastern standards, and by comparing the copper oxhide-shaped ingots from the cargo with depictions in Egyptian tombs showing the same ingots carried by Syrians, he concluded that the vessel that sank at Cape Gelidonya around 1200 BCE belonged to a tinker of Syro-Canaanite or Cypriot origin.2 This thesis contradicted the prevailing perception that Late Bronze Age maritime trade lay exclusively in the hands of Mycenaean Greeks.

While still a Ph.D. student, Bass directed the excavation (1961–64) of a seventh-century Byzantine shipwreck at Yassıada, Turkey. Yassıada in the 1960s became a proving ground for innovative tools and techniques (including the airlift, telephone booth, stereophotogrammetry, and submersible decompression chamber) aimed at improving the efficiency, accuracy, and safety of underwater excavation.3 Bass also experimented with underwater survey technologies (including the magnetometer, side-scan sonar, and Towvane) in an effort to locate more shipwrecks, even launching the first commercially built two-man submersible, Asherah, in 1964. Perhaps the greatest legacy of Bass’ influential work at Yassıada was the team he assembled, which included, among many others, Susan and Michael Katzev, who excavated the well-preserved ancient Greek ship at Kyrenia, Cyprus (1968–69), and Frederick van Doorninck, Jr., who demonstrated how much information about ancient ship construction could be gleaned from fragmentary wooden hull remains.4

This seminal underwater archaeology fieldwork conducted by Bass in the 1960s occurred under the aegis of the University of Pennsylvania’s University Museum, where Bass was a member of the curatorial staff. Upon receiving his doctorate in 1964, Bass joined the classical archaeology faculty at Penn and was promoted to associate professor in 1968. But Bass had a bigger dream: an independent institute devoted to shipwreck archaeology, and in 1973 he left the stability of his tenured position. He uprooted Ann and their two young sons Gordon and Alan, sold all of their possessions, and moved the family from Philadelphia to Cyprus, the initial home of the newly established Institute of Nautical Archaeology (INA).5 It was a bold and risky venture, which Bass attributed to the “sense of urgency” that he often cited as the secret of his success.

The Cypriot coup of July 1974 played havoc with that dream: the family fled Cyprus and returned to Pennsylvania. Within two years, Bass found a new academic home for his nonprofit institute at Texas A&M University, and the Nautical Archaeology Program (NAP) was established as the first academic program in the United States to offer a graduate degree in the archaeology of ships and history of seafaring. In selecting the original NAP faculty, Bass followed the same mantra that had served him so well in the field: “Never be afraid to surround yourself with people who know more about what you’re doing than you do.” Bass’ holistic vision for the NAP curriculum continues to this day, with educational emphases in ship reconstruction and ancient seafaring, survey and excavation methods, and the conservation of artifacts from underwater environments. Bass himself was unique in his ability to leverage the discrete but symbiotic strengths of INA and Texas A&M; a testimony to this are the 10 endowments he helped secure between 1986 and 1993, which continue to support research and fieldwork carried out by NAP faculty and graduate students.

During the summer of 1976, with the INA-Texas A&M affiliation finalized, Bass directed a field school in Virginia’s York River, where the focus was a British ship sunk during the Siege of Yorktown (1781), the last major battle of the American Revolution. That field school set in motion a decade-long research project that identified 11 British ships, one of which, the coal carrier Betsy (built in 1772) was excavated from within a cofferdam in the 1980s. Bass was writing the foreword for the final publication of Betsy when he died.

In 1977, Bass returned to Turkey to begin the excavation, over three seasons, of an 11th-century shipwreck at Serçe Limanı. That excavation produced the largest known assemblage of medieval Islamic glass and revealed important evidence for the transition from shell-based to modern frame-based ship construction.6 The project also provided the first cohort of NAP graduate students with hands-on experience on an INA underwater excavation, a practice that continues to this day. In 1979, Bass was awarded the National Geographic Society’s LaGorce Gold Medal, and in 1980 he became a Distinguished Professor of Anthropology at Texas A&M.

Bass and INA are most famous for the excavation, between 1984 and 1994, of the Late Bronze Age shipwreck at Uluburun, Turkey. Regarded by many as one of the most significant archaeological discoveries of the 20th century, the Uluburun shipwreck dazzled the world with a cargo of raw materials (copper, tin, glass, hippopotamus ivory, orpiment, terebinth resin, ebony) and elaborate finished objects (pristine Cypriot pottery, ivory boxes, metal vessels, faience cups and beads, gold and silver jewelry) that can only have been gifts exchanged between kings, pharaohs, and elites. The Uluburun wreck was proof that the complete and scientific archaeological excavation of a single shipwreck can define or redefine what is known about a given era. For Bass personally, the Uluburun shipwreck proved the thesis that he had laid out 30 years earlier regarding the central role of Syro-Canaanite merchants in Bronze Age trade. The Uluburun shipwreck was, in every way, the discovery of a lifetime, and yet in 1985 Bass unselfishly turned over the excavation to his Ph.D. student, Cemal Pulak. Among the many awards presented to Bass in the 1980s were the AIA’s Gold Medal for Distinguished Archaeological Achievement (1986) and the National Geographic Society’s Centennial Award (1988).

In 1988, Bass spearheaded the purchase, in Bodrum (ancient Halicarnassus), of an olive grove atop a hill dotted with a short segment of the city wall built by King Mausolus in the fourth century BCE. That bit of wall now marks the boundary of INA’s Bodrum Research Center (BRC), a complex of offices, conservation laboratory, dormitory, and research library. In 2000, Bass organized the purchase of the Homer Thompson library as the foundational collection for the BRC’s newly completed library. Today, the BRC is staffed by a team of 20 Turks, including archaeologists and conservators, and serves as the base of operations for INA surveys, excavations, and post-excavation conservation and research. The Bass residence lies directly adjacent to the BRC, symbolic of George’s desire to stay close to the institute he founded and the people therein.

Bass spent the rest of his archaeological career directing or supervising the excavation of shipwrecks in Turkey, including the Byzantine wreck at Bozburun (1995–98), the classical Greek wreck at Tektaş Burnu (1999–2001), and the archaic Greek wreck at Pabuç Burnu (2002–03).7 In each case, he handed over much of daily operation and the responsibility for the final publication to his former students; in this way he honored the model of Rodney Young, who remained a powerful influence. Bass dived for the last time at Cape Gelidonya in 2010, 50 years after his original, pioneering expedition.

Bass believed firmly that public enthusiasm (and funding) for archaeology was fueled by discovery. His experience with remote sensing equipment in the coastal waters of Turkey, where he directed seven shipwreck surveys, was sufficiently discouraging that he elected instead to search for shipwrecks from a manned submersible. Bass was delighted by the construction and launch, in 2018, of INA’s 80-foot research vessel Virazon II, the first ship in the world to be classed as an Archaeological Research Vessel. In the field, Bass always advocated for safety, simplicity, and frugality, in that order. His fieldwork was generously supported by INA, Texas A&M, the Institute for Aegean Prehistory, the National Endowment for the Humanities, the National Science Foundation, and the National Geographic Society (36 grants over 39 years).

Bass was a devoted educator. At Texas A&M he taught undergraduate courses in classical archaeology and graduate seminars in Bronze Age, classical, and medieval seafaring. During his 24 years on the NAP faculty, Bass chaired 34 master’s and eight Ph.D. committees. Believing as he did in the importance of educating graduate students in all aspects of an archaeological career, Bass designed a one-credit-hour seminar entitled “Old World, New World, Real World,” in which he tackled grant writing, fundraising, oratory, public outreach, and treasure hunting. On at least one occasion, he brought explorer Gregg Stemm to the classroom; the ensuing lively debate demonstrated that Bass could talk to anyone, even someone whose views were diametrically opposed to his own. Outside of archaeology, one of Bass’ great passions was opera, and for 30 years he and Ann hosted a monthly Opera Night in their home, which various NAP faculty and graduate students attended regularly. Bass retired from Texas A&M University in 2000 and became a Distinguished Professor Emeritus in 2001. Later that same year he was named a recipient of the nation’s highest award for lifetime achievement in scientific research, the National Medal of Science. In 2011, he received the AIA’s Bandelier Award for Public Service to Archaeology.

Bass was a prolific writer, authoring or coauthoring 11 books and more than 200 scholarly and popular articles. His colleagues recollect with awe how he could draft an entire article in one sitting. Bass often lectured about the importance of timely publication, but he also believed that the quality of a publication was determined in large part by the caliber of the excavation: “It is not good archaeology to work site after site without the commitment to continue the project for as long as it takes. . . . No true archaeologist would undertake the excavation of a site without being willing to commit as many years to it as necessary, even if it were that person’s entire life.”8

George is survived by his wife, Ann, sons Gordon (wife Jennifer) and Alan, and two grandsons, Charles and Henry. Those of us left in his wake wish him fair winds and following seas.9

Bass, G.F. 1973a. A History of Seafaring Based on Underwater Archaeology. New York: Walker.

Bass, G.F. 2005. Beneath the Seven Seas: Adventures with the Institute of Nautical Archaeology. London: Thames & Hudson.