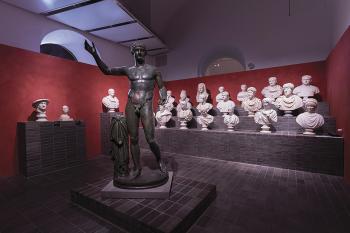 The Torlonia Marbles showcases nearly 100 ancient statues selected from the thousands acquired by the rich and powerful Torlonia family in 19th-century Rome. Hidden from view for half a century, the works have been cleaned, conserved, and studied for the exhibition. Some of these are so famous that they are eponymous with the family: the Torlonia Port Relief, depicting the port of Ostia; the Torlonia Girl, depicting a young maiden; and the Torlonia Man, depicting a grizzled old man in Republican-period veristic style. Because of the collection's history (and vast size), the curators opted to display the works largely on the basis of the early modern collections to which they previously belonged, among them the Albani, Cesi, and Giustiniani. Thus, it offers a rare opportunity to consider how the shifting patterns of taste from the 16th through 19th centuries are revealed in the collecting, displaying, and restoring works of ancient sculpture.