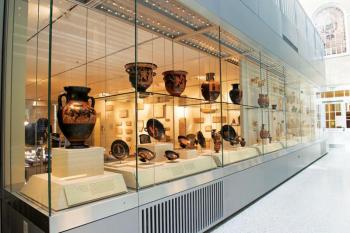 Reflecting an intense interest in classical antiquity in the late 19th and early 20th centuries in the United States, which was fueled in part by Heinrich Schliemann’s excavation of Homeric sites, institutions of higher learning began to amass collections of antiquities. A predilection for Greek and Roman objects was fostered by educational systems that emphasized classical literature and languages, and so in the early years ancient artifacts from the Mediterranean were often acquired as adjuncts to the teaching of classics, archaeology, and art history. Housed in antique wooden cabinets and miscellaneous drawers within academic departments, these objects were not usually considered to be of art museum quality and were used primarily as pedagogical tools. Many were acquired as gifts, but some collections were the result of archaeological excavations undertaken by faculty. Eventually, most of these disparate collections morphed into full-fledged accredited university museums of art or anthropology. Still arranged primarily for the education of students, these ancient art galleries at colleges and universities throughout the United States now also serve the wider public and play an important role in disseminating knowledge about the cultures of the ancient Mediterranean.