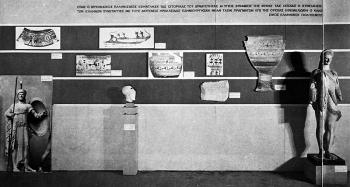 Periodization is a fundamental exercise for archaeology and for historical studies in general, aimed primarily at clarity in communication. However, this exercise imposes particular modes of conceptualizing specific periods. An attractive case study for research in the historiographical processes that shape periodization is posed by the period of Greek archaeology extending from the end of the second to the early first millennium B.C.E. This study analyzes the different conceptual baggage of each of the many names used for this period and focuses on the terminological struggle between the Dark Age(s) and the (Early) Iron Age. Ι argue that this struggle was shaped not only by discussions within classics but also by debates in other historical disciplines and developments in the political history of 20th-century Greece. The struggle over the name of the period has served as an arena for the unfolding of broader politicized debates in classics, Greek history, and the archaeology of the Mediterranean.

More articles like this:
History of Archaeology
Iron Age
Greece

I am not going to defend the

I am not going to defend the term "Dark Age" and criticize the Early Iron Age. In my opinion these were always two different ways of describing either a historical or archaeological background. I will defend, however, my statement, criticized by you so brutally, about a confusing character of the term of the Early Iron Age in the Aegean Archaeology (Nowicki 2000, 16). I always beg people, when quoting my work to read the whole paragraph at least (if reading the entire chapter is too tiring!). You took only a part of my arguments and did not answer to my doubts expressed a few lines later. I wish you would address the problem which I pointed to: namely the Early Iron Age chronological range was and still is unclear. That is why it is confusing, especially for younger colleagues when they read about the same sites by some authors dated to the end of the Bronze Age and by other to the Early Iron Age. Is that not confusing? You just made a short remark about the problem with the 12th and a part of the 11th century, but you did not clarify the problem. Is an LM IIIC early site still in the Bronze Age or already EIA? Whatever is the answer, we will have a problem. I do not see any reason to locate Monastiraki Katalimata in the EIA, in my opinion they are still the people living in the LBA. If the term EIA in the Aegean was invented/worked out alongside with other chronological phases, as a part of the entire chronological system, as it was in the European prehistory I would have no reservation, and I would not say the introduction of the term was confusing. However, it was not, it was imported and applied to the long established chronology based on the pottery styles. This problem concerns unfortunately also other periods of the Aegean prehistory. To sum it up, I also prefer the term EIA in any archaeological discussion, and I still support the Dark Age term for general historical discussions, there is no conflict between these two. As there is no CURIOUS division line you made between scholars of old and young generation. This last assumption made by you is even more relative than the EIA chronological range. The EIA must however, be better elaborated and finally chronologically coherent and explained.