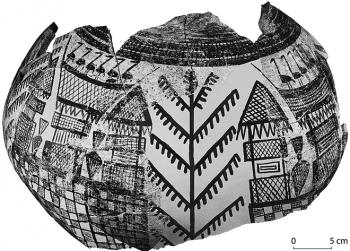 This article discusses the potential value of geoarchaeological and paleoenvironmental data for the contextualization of human activity at the site of Domuztepe, southeast Turkey. The data come from cores excavated on a series of transects centered on the höyük and from samples collected for paleoenvironmental assessment and radiocarbon dating. The results indicate that the site is situated on an alluvial plain of some stratigraphic complexity. Deep (up to 9 m) sediment sequences consisting of peats, marls, silts, clays, sands, and gravels appear on all sides of the höyük. Soil and water conditions during the Holocene on the Narlı plain were quite probably different from present conditions, which are partly attributable to recent drainage and irrigation, with climatic changes also playing a significant role. The evidence suggests there were both periods of relatively wet local conditions with deep freshwater close to the site and episodes of drier, brackish conditions. Episodes of peat formation are recorded during the later Pleistocene (19,000–21,000 b.p. [calibrated]) and Early Holocene (9,500 b.p. [calibrated]). It seems unlikely that the site of Domuztepe was originally located on any topographic high point. While the extent of cultivatable land in the close vicinity of the settlement is unclear on the basis of the current data, local wetlands would have provided a range of resources, including plants, clays, and marls, evidenced in both the architecture and the cultural and environmental material from the excavations. The deposition of the alluvial silts and clays seems to have occurred during the later Holocene, with Roman pottery in these deposits providing a terminus post quem for the uppermost clays. These sediments probably mask the actual depth and extent of the archaeological remains at Domuztepe and might also obscure other early archaeological sites on the Narlı plain.