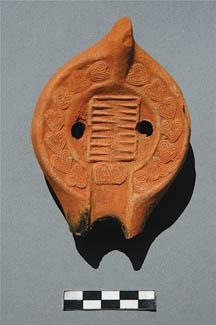 In the Early Byzantine coastal settlement at Punta Secca (province of Ragusa), traditionally identified with the Kaukana of the ancient sources, excavations in a hitherto unexplored building took place over three seasons from 2008 to 2010. The structure, consisting of four chambers set around a yard (the latter contained a staircase to an upper story), has every appearance of being a domestic dwelling. Seven structural phases were identified, all probably occurring within the first half of the seventh century C.E. The most surprising and unusual discovery was an elite tomb, erected ca. 625/30 C.E. in an area probably open to the sky, in which the bodies of a pregnant woman aged about 25 and of a child aged about four were found. A libation hole in one tomb slab and the presence of a bench and offering table (mensa), as well as hearths and a plentiful array of amphoras, cooking pots, and red slip tableware, indicate that meals were consumed here in honor of the deceased, who were almost certainly Christians. The discovery, unique in Sicily, is discussed in the context of what else is known archaeologically about funerary feasting in a Christian context in the Mediterranean world of late antiquity.