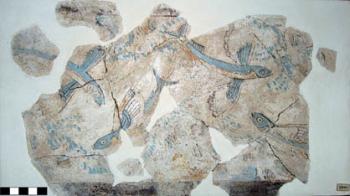 During the 2008 and 2009 excavations at Tel Kabri, more than 100 new fragments of wall and floor plaster were uncovered. Approximately 60 are painted, probably belonging to a second Aegean-style wall fresco with figural representations and a second Aegean-style painted floor. A date within the Middle Bronze II period, probably in the 17th century B.C.E., may be suggested for the Kabri frescoes, which makes them significantly earlier than the Tell el-Dab’a and Qatna frescoes and roughly contemporary with the Alalakh Minoan-style frescoes. That there are at least four Aegean-style frescoes found to date at Kabri (two painted floors and two wall paintings) may hint that either the palace was decorated with a single Aegean pictorial plan in mind—an ambitious undertaking by a unique Canaanite ruler—or that different paintings were commissioned in different episodes and executed by different Aegean (or Aegean-trained) artisans. Whichever the case, the close resemblance of the Kabri miniature fresco found by Kempinski and Niemeier to that in the West House at Akrotiri on Santorini, and the resemblance of the new figurative fresco to various Aegean paintings, provides hints as to the origin of the artisans (or single worker) at Kabri, who may have been an itinerant recruited in the Cyclades through Cypriot middlemen trading with Kabri.