Hellenistic Landscapes and Seleucid Control in Mesopotamia: The View from the Erbil Plain in Northern Iraq

Hellenistic Landscapes and Seleucid Control in Mesopotamia: The View from the Erbil Plain in Northern Iraq 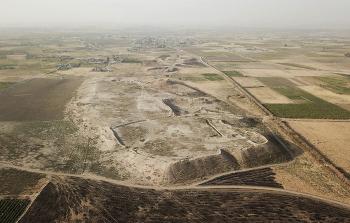 In this article we discuss the archaeological landscapes of the Erbil plain during the Hellenistic period (late fourth century BCE–mid second century BCE) based on the data collected during the Erbil Plain Archaeological Survey (EPAS) between 2012 and 2019. We use a landscape archaeology approach to trace patterns of habitation, migration, land exploitation, and water management from the Iron Age to the early first millennium CE. Over the course of the first millennium BCE, the Erbil plain was transformed from an urbanized core region to a rural area of the vast Seleucid world through a moment of depopulation in the post-Assyrian period. These transformation processes continued after the end of the Hellenistic period, but with a different pattern. Urbanization resumed, peaking during the Parthian (Arsacid) era, when the region was part of the kingdom of Adiabene. Ultimately, our analysis shows how the planned landscape of Assyria was transformed in the centuries that followed the collapse of the empire and how the proximity of political power was the critical variable in the settlement patterns of this part of northern Mesopotamia under the empires of the first millennium BCE.