The Sixth-Century CE Shipwreck at Marzamemi

The Sixth-Century CE Shipwreck at Marzamemi 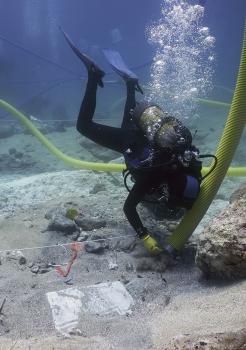 Between 2013 and 2019, collaborative survey and excavation were carried out on the sixth-century CE shipwreck at Marzamemi, in southeast Sicily, originally explored by Gerhard Kapitän in the 1960s. The vessel sank while carrying a primary cargo of nearly 100 tons of extensively prefabricated architectural materials, at least some intended for a church. New finds raise questions about the prevailing narrative of the wreck as emblematic of a stagnating Late Antique economy, revived only briefly by Justinian. Large but uneven numbers of worked stone elements complicate assumptions regarding their employment as a single set, while additional decorative materials suggest networks of artistry and agency that transcend a single journey. A smaller secondary cargo of amphoras, along with galley wares and other finds, reveals the extended commercial webs of this merchant vessel and its sailors. Considered together, the assemblage highlights the interdependence and blurring of boundaries between high-end and more mundane exchange. This report offers a new reading of the well-known Late Antique wreck and a more nuanced evaluation of the goods, people, and processes that tied together the Mediterranean during a transformative period toward the end of the Roman empire era.