A Recently Discovered Spring Source of the Aqua Traiana at Vicarello, Lazio

A Recently Discovered Spring Source of the Aqua Traiana at Vicarello, Lazio 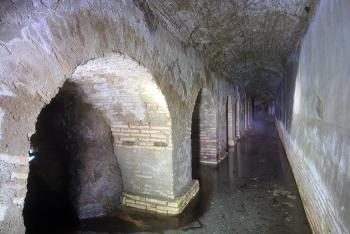 We report on an important spring source among the headwaters of the Aqua Traiana, the aqueduct introduced by the emperor Trajan to Rome in 109 CE. Located at Vicarello, adjacent to the celebrated thermal bathing complex of Aquae Apollinares, the vaulted gallery and its various intake and offtake branches are preserved in a restoration of the 17th century for use in the Acqua Paola. The question of when precisely this sector of the aqueduct was begun gains special relevance when one considers that Domitian built a large villa in the immediate vicinity and seems to have exerted his personal influence over the development of the bathing complex, too. We argue that Vicarello may have been the birthplace of the Aqua Traiana and that the collection of water there initially was confined to the villa, the nearby bath complex, and within the complex, a monumental nymphaeum. As more springs in the region became available, Domitian may have laid plans for what would become the Baths of Trajan in Rome. We trace the hypothetical stages through which his vision for a small local aqueduct expanded into a grand urban project, eventually to be appropriated and largely implemented by Trajan.